While ‘proper’ footwear has likely been the furthest thing from our minds in recent times, 2022’s promise of a return to real life outside the home has many looking to revitalise their wardrobe beyond the confines of comfortable, slouchy, stay-at-home loungewear.

And when it comes to outdoors attire, the importance of good, quality footwear should never be in question. “I’ll be honest, in 2016 I didn’t know how to make a shoe,” confesses LANX founder,  Marco ‘Marv’ Vaghetti. “The inspiration for the brand came when I received a letter on 26.07.2016. The contents – which shall remain private – put the fire in my belly to create my own shoe company.”

From such unusual beginnings, it would take a further two years – and a research trip which took him across the globe – for the former marketing and events coordinator to launch his Lancashire-based footwear brand in late 2018. “If I’d known how  long and hard the road was going to be, I would likely have given up,” he laughs. “But I like a challenge, and I’m glad I persevered!” 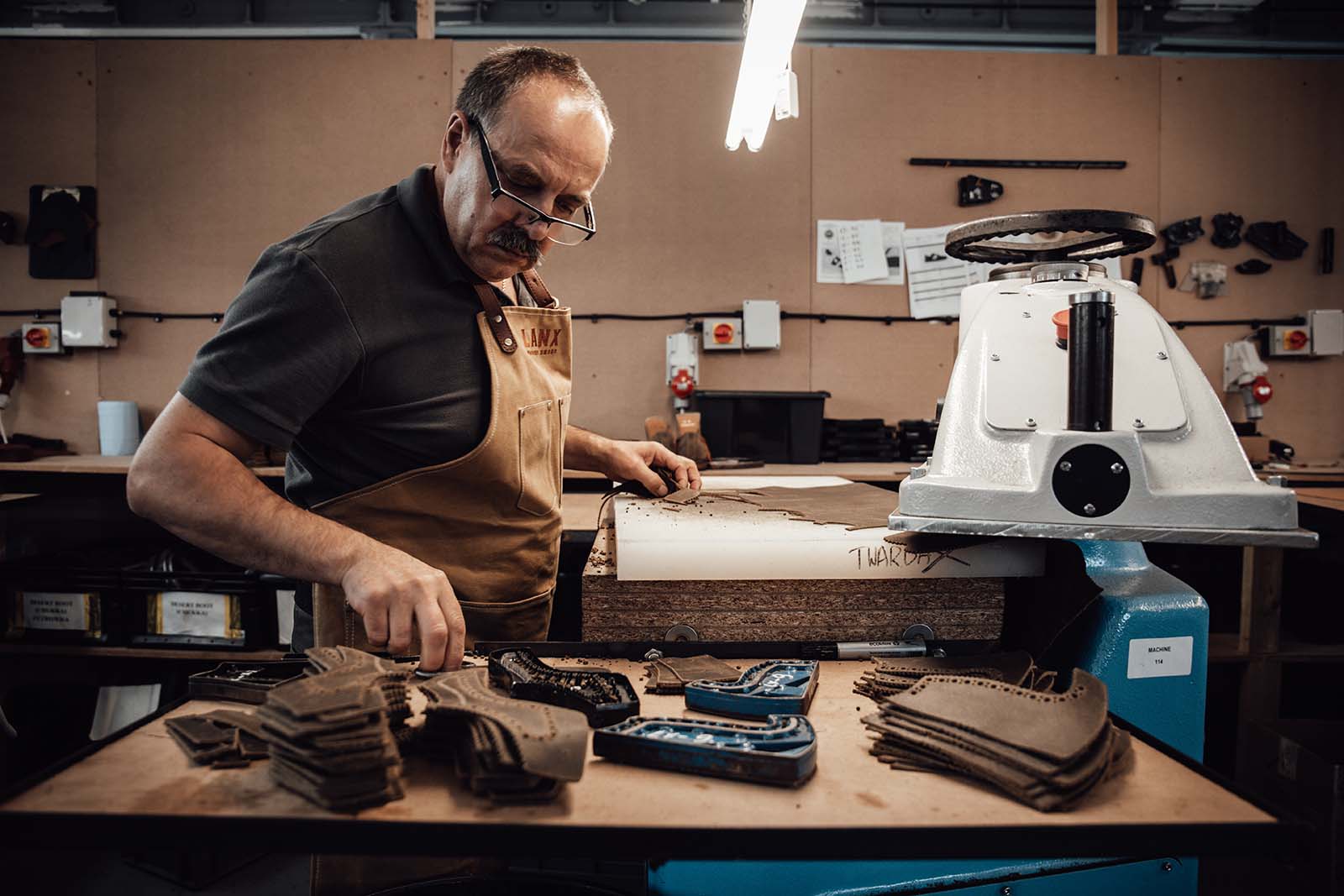 The British footwear brand design business-casual shoes that are reassuringly sturdy with a twist of elegance, self-branded as ‘modern shoes in which to work hard, play hard and look good in for any occasion’. Each collection features unique embossments, stylish broguing, the finest leather and British sourced textiles, with every shoe stamped with the Lancashire rose and the brand’s ballsy British White bull.

The debut collection was heavily influenced by the shoe craftsmanship Marv witnessed whilst traveling  around Japan in 2016. “I was particularly inspired by the many talented shoemakers located in the Tokyo  suburb of Asakusa, a hub for shoemaking in the Japanese capital,” he tells me. “In all I visited 10 countries on my worldwide tour, had some incredible adventure, met some fascinating people, and picked up countless shoe industry secrets along the way. Most of the shoemakers I visited were still making by hand – a deeply traditional skill which I found hugely inspiring, and which left a long-lasting impression on me.”

By the time a LANX shoe reaches your foot at least 20 different people have been involved in the meticulous process.

His Italian grandfather Alberto aside, Marv’s immediate family hail from Blackburn, Bolton and Preston, and he tells me that he draws huge inspiration from the local Lancashire area the brand calls home, including the recent ‘British Tweed’ collection which drew inspiration from the beautiful Ribble Valley countryside, and Pendle Hill in particular. “Several of our shoes are even named after local villages, towns and pubs,” he says, “many of which we frequent after work for a swift half or two!” 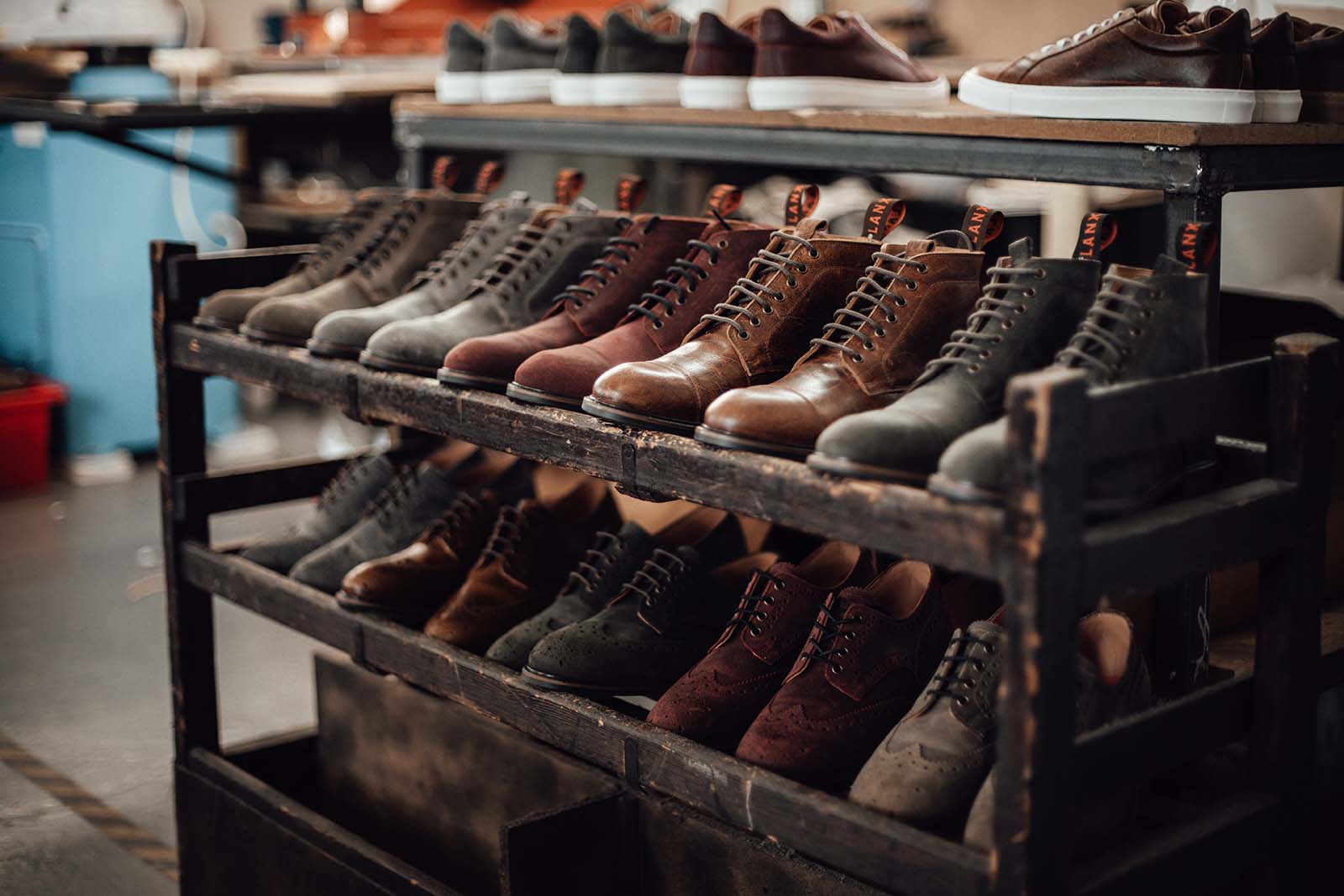 He’s also incredibly passionate about working with Lancashire based suppliers, and proud to manufacture many of the collections entirely in the Red Rose county. “The sourcing of materials plays an integral role in our design process,” says Marv, “with many of our  ranges being based solely on the material itself and where it is from. We work with some of the best leathers and fabrics in the world, the most notable of these being our collaborations with Northern British suppliers, including Charles F Stead in Leeds, Marton Mill in Otley and British Millerain in Rochdale, all of whom are based just an hour from our front door.”

“The manufacturing for all of our ranges is a lengthy process,” he tells me, “due to the vigorous sampling and testing stages that each shoe style must go through. Our in-house designers work closely with a variety of small,  independent factories to produce a varied range of high quality formal and casual footwear. We work with  different factories to ensure we source the very best craftsmanship for each specific style of shoe we  produce. Not all factories are the same, and the very best tend to specialise in one type of footwear so that  they can perfect their craft. As we only make a limited number of pairs in each of our styles, we’re able to ensure that each individual LANX shoe is given the attention needed to maintain the very high standards of production we’ve set for ourselves.”

It takes around 16-18 months for each new style LANX release to be developed from a paper sketch to a physical product on the shop shelves. The meticulous process involves many different rounds of design, sampling and testing, along with copious rounds of tea and biscuits (!), before final tweaks can be made and a product approved for manufacture. It’s that level of care and attention – and desire for perfection – that has seen LANX recently expand their footwear offering to include new styles specifically created for women. 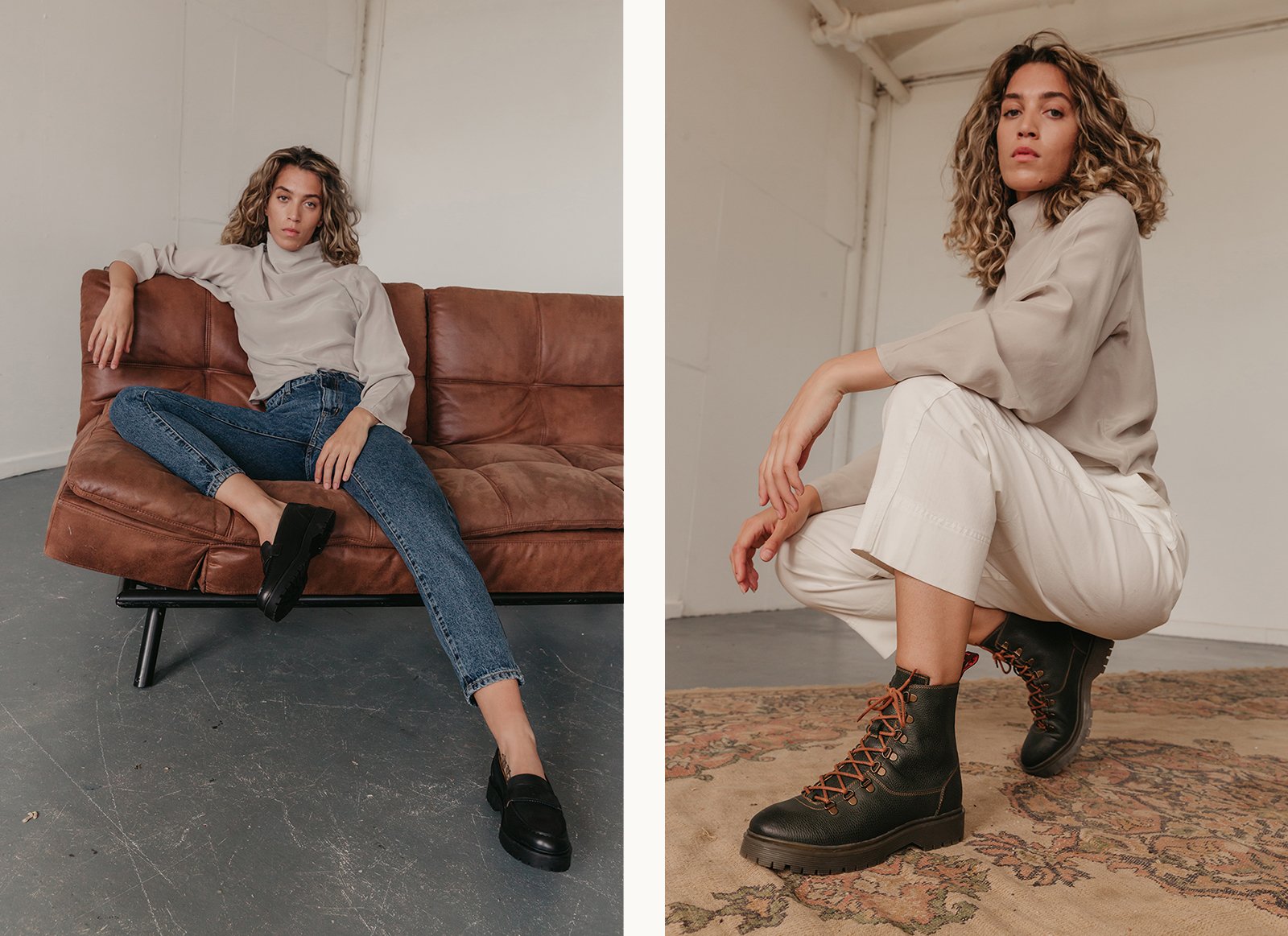 “When LANX first started out, we built our initial collections for men as this was where our primary expertise  and experience lay,” says Marv. “As we’ve developed our brand and carved out a space in the men’s footwear market, we’ve attracted an incredible following from women. Many would buy our men’s shoes and many others wanted to wear our existing styles, but the size offering was an issue. So, the message was loud and clear –  we needed to create similar shoes, but with a female-specific fit.”

Following 18 months of in-house design and research, LANX launched their first dedicated women’s collection in July 2021 and within six weeks, many styles had sold out. “It’s been incredibly well received,” says Marv, “and I  can’t wait to see how this area of the brand develops!” 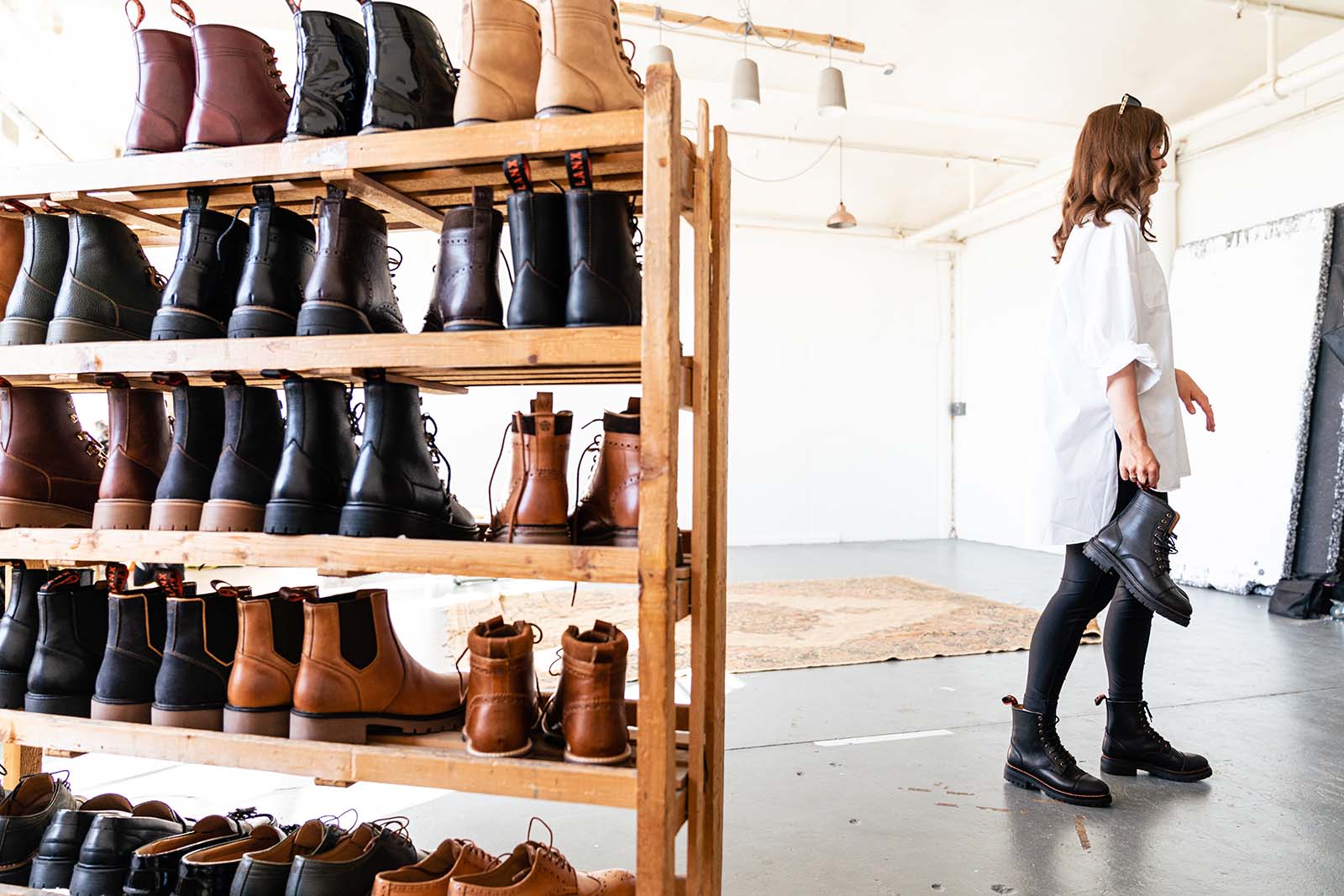 When it comes to long-term ambitions for the brand, Marv tells me that the main objective is for a brand that shoe lovers respect, and customers are proud to wear. “However, I recently read a great book called ‘Shoe Maker’, all about Joe Foster, the founder of Reebok, and his ups, downs and eventual world domination. It was incredibly inspiring to read all about how a small Lancashire shoe business grew and grew, and it makes me think… could it be done again?!”

All photography © LANX, used with permission.

Kate is the founder and editor of Fabric of the North, borne out of her passion for supporting mindful, aesthetic and sustainable small businesses. Based in the North West, by day she helps thoughtful small brands and solo business owners achieve meaningful growth through 1-2-1 guidance, intentional strategy and considered content creation. She is also a veteran blogger, having launched her award-winning interior lifestyle blog Fabric of my Life back in 2009.