2020 really has been all about the home, and with so much of the year spent within our own four walls, lockdown DIY projects and interior makeovers have been the order of the day.

There can be few more impressive than Hugh Miller’s stunning kitchen makeover though. Nicknamed the Furniture Maker’s Kitchen, it has just been awarded the prestigious ‘Kitchen Design of the Year’ (over £30,000 category) award at the 2020 Designer Awards. Designed during the first phase Covid-19 lockdown, the design reflects a pure, uncompromised expression of the Liverpool-based architect-turned-furniture maker, allowing him to push kitchen design boundaries and be far more innovative than working on a client-led project would usually allow. 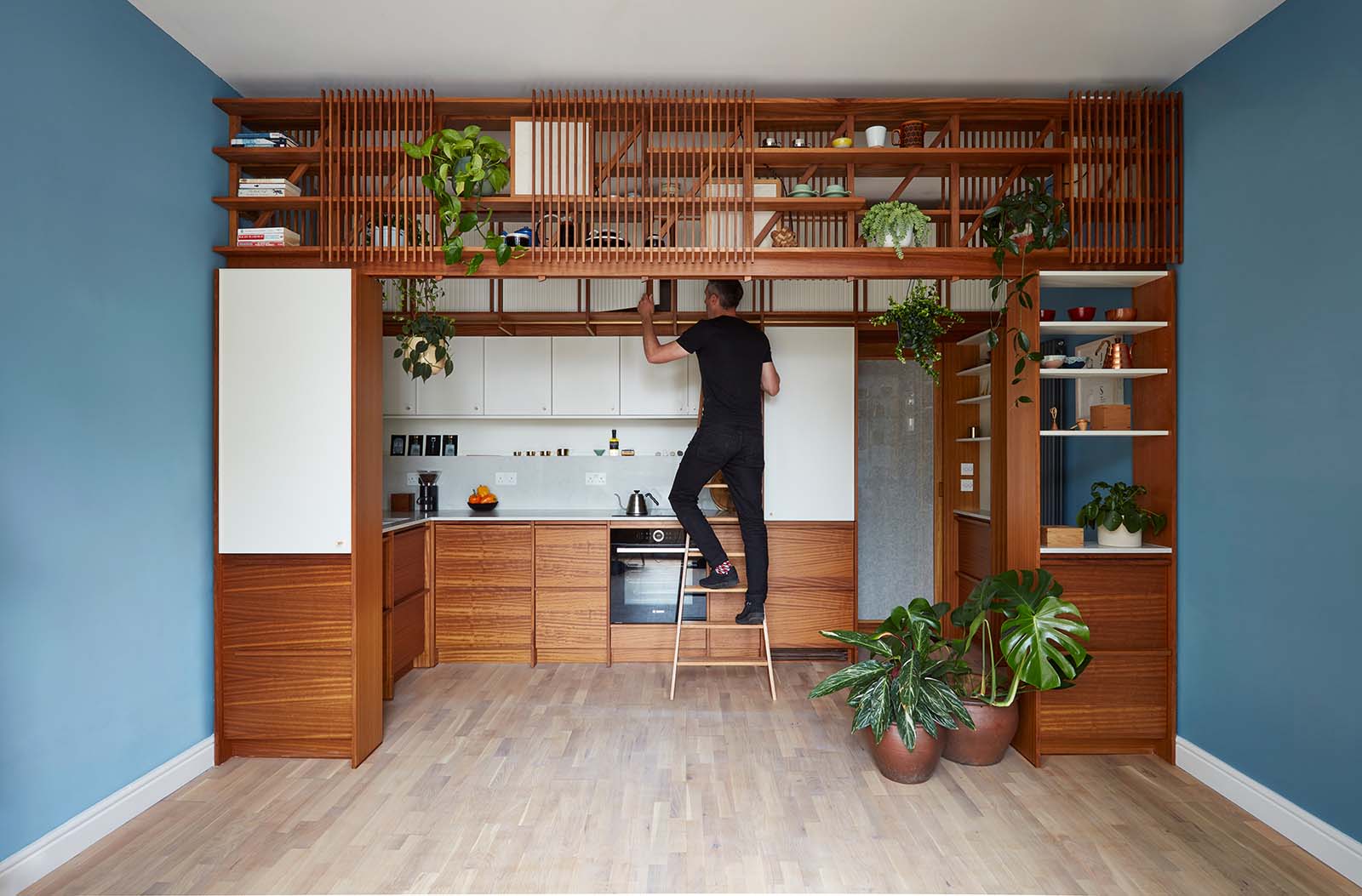 With a workshop based in the heart of Liverpool’s creative district – The Baltic Triangle – Hugh is one half of H. Miller Bros, a bespoke luxury kitchen design company he founded in 2019 with his brother, Howard. “Hugh and I have been making things together since we were kids,” Howard tells me. “We both trained as Architects, but after University pursued different paths: I became a chartered architect and practiced in London, New York and Sydney on a variety of high-end residential projects, schools and historic buildings, while Hugh founded his furniture design studio and workshop at the age of 24.”

Kitchens is where our two design disciplines overlap – kitchens are collections of furniture to Hugh, and small architecture to me.

Career highlights for Howard include a gold-medal winning Dark Matter garden at the Chelsea Flower Show, and winning an RIBA award and Architectural Review school award for the Pegasus Academy. Hugh meanwhile won a Winston Churchill Memorial Fellowship that allowed him to travel widely in Japan for his research study on Japanese wood craftsmanship. He has also exhibited furniture at the Saatchi Gallery, in the British Pavilion at the Cheongju Craft Biennale, South Korea, and in the Næstved Museum, Denmark.

When I ask what it is that fuels the brothers’ passion for kitchens, the answer is three-fold. “It’s a good question,” says Howard, “and there are a few strands to this. The first is that we wanted to work together; we had been sharing a workshop and studio space for 7 years and have always acted as each other’s second pair of eyes on whatever we are working on. Kitchens is where our two design disciplines overlap – kitchens are collections of furniture to Hugh, and small architecture to me – so this was a natural starting point. Another reason is that it’s a family business, and the kitchen space is the place that the family comes together. We do a lot of cooking, we live around the corner from each other, so it’s an environment we are quite passionate about. Finally, the kitchen is a good vehicle for the kind of holistic design we enjoy: it touches on the tiny details, like a particular timber joint or handle, product design – such as our bread box and larder cabinet – as well as interior design and architecture.” 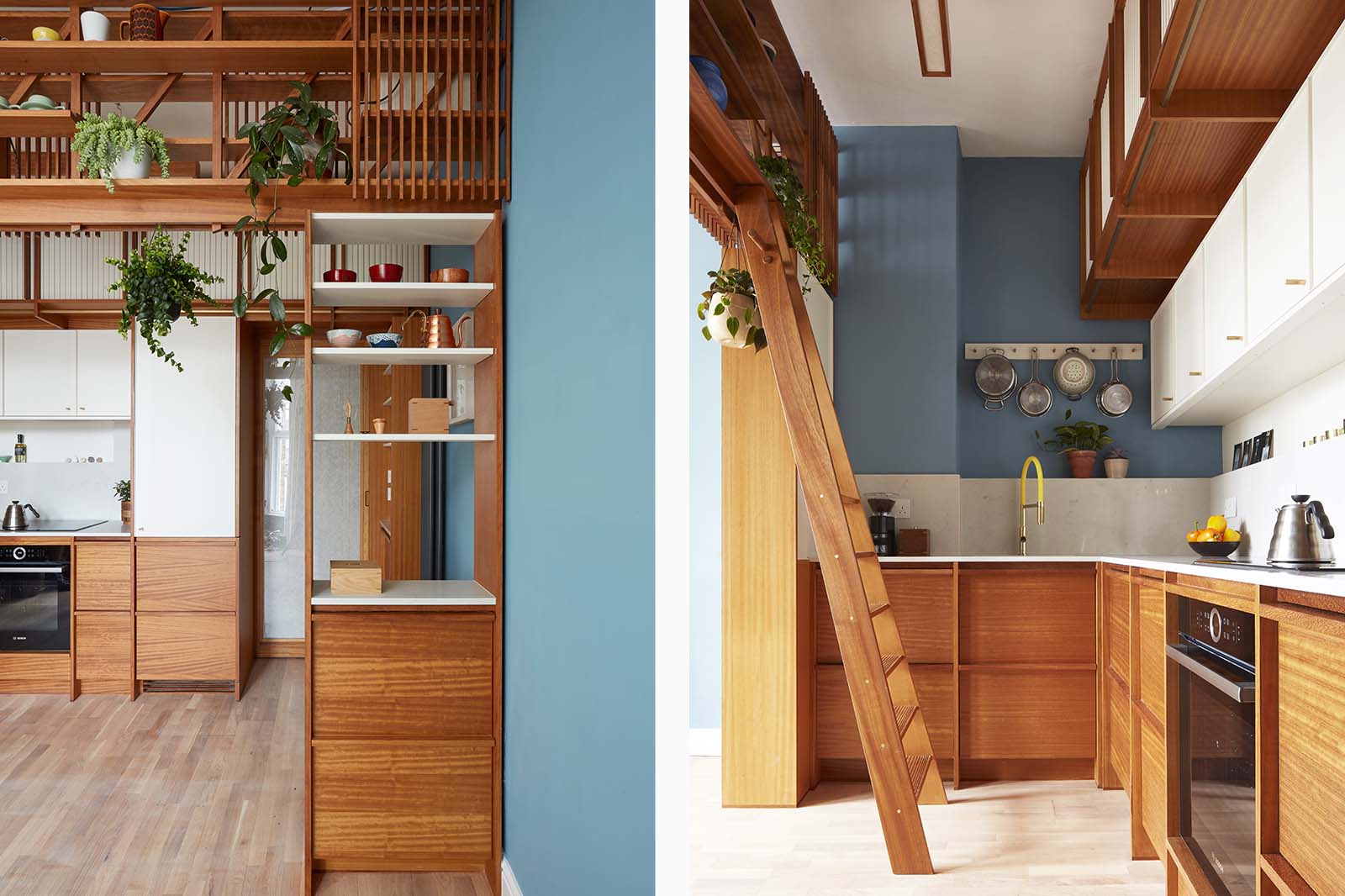 While most kitchen design companies have a customer showroom and build configurations from prefabricated units, H. Miller Bros operate differently. “We don’t have a showroom,” they say, “because every design we do is a one-off and inspired by the client’s particular needs and style. This is a feature rather than a bug, because it allows us to plough the resource into design time rather than overheads that don’t add value to the client. We have a tried-and-tested design process that leads a client from the broad, strategic design considerations progressively through increasingly specific stages until we have a very accurate 3D model, perspective images and real life samples from which we start to make from. We like to use the analogy of a tailor. If a customer walked in and said “clothe me”, we would start by asking about what kind of garments they need, and then work through styles and materials, to trying items on for size, then adding the final touches.”

When it comes to the company’s sustainability ethos, Howard has an MSc in Architecture: Advanced Environmental Studies from the Welsh Institute for Sustainable Education, and is extremely passionate about environmental issues. “We have recently become part of the Low Carbon Eco Innovatory,” he tells me, “a collaborative partnership between local companies in the Liverpool City Region and University researchers at Liverpool John Moores University. It’s a hard question to balance though; on the one hand how do you justify any Luxury consumer product as sustainable?” he says, “while on the other, we are making kitchens that last a generation, far longer than the mainstream alternative; out of timber, an inherently sustainable material; and we’ve made a great deal of effort to make our processes as lean as they can be to reduce waste.”

“We’re continuously trying to make small improvements,” he says. “For example, I’m currently looking at paints and testing less impactful finishes. Rather than spout some greenwash, we prefer to be honest and say we’re ahead of the mainstream by some way but that’s not good enough for us; we’re not there yet, we’re chipping away at it and steadily improving on what is already a good by industry standards.” 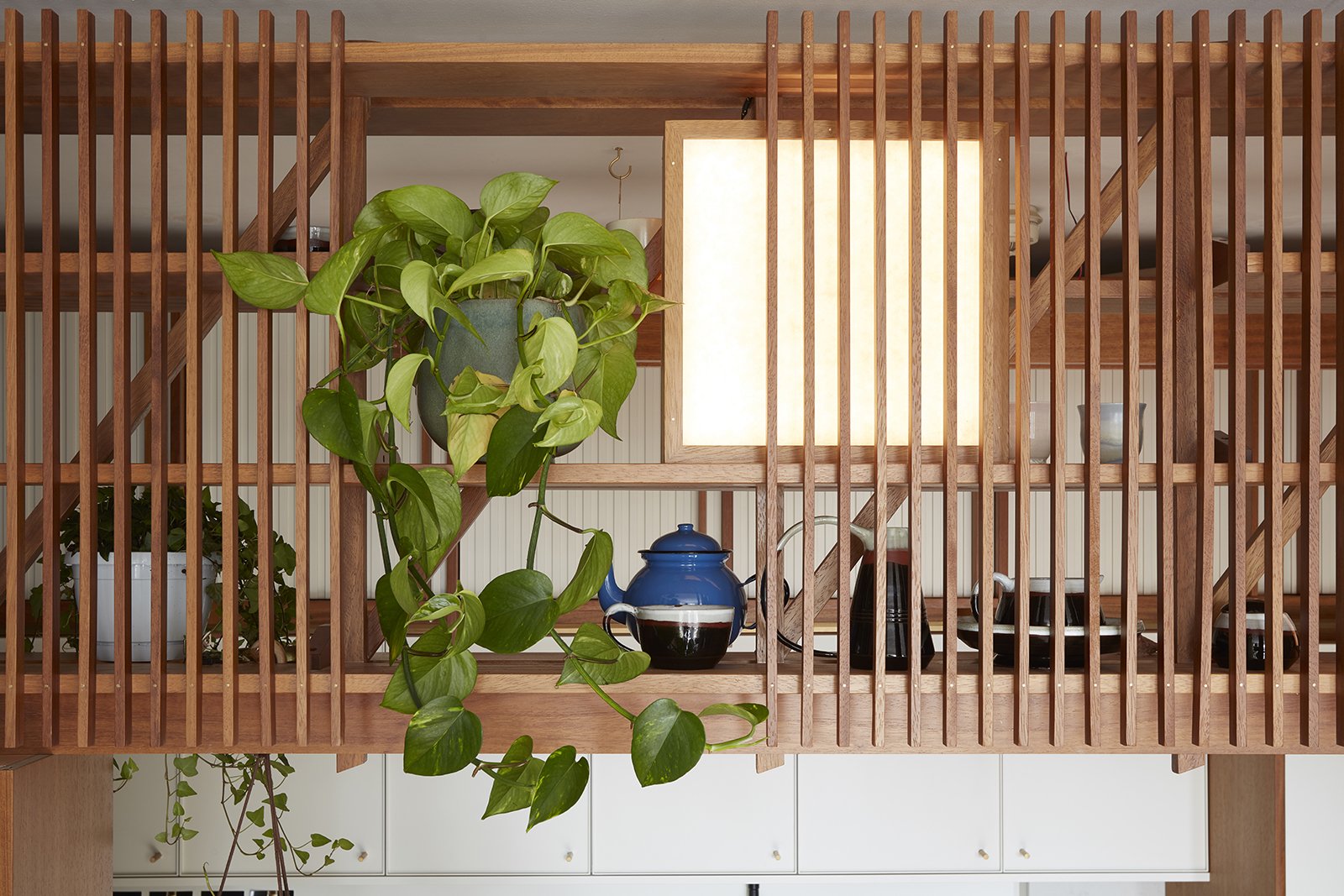 This brings us back to Hugh’s award-winning Furniture Maker’s Kitchen, set in a Victorian property in Aigburth, Liverpool. “The setting was one large room that encompasses kitchen, living and dining areas,” says Howard, “and there was a need to define the kitchen space as separate from the living area. There was also a requirement for additional storage and plenty of room at high level so an idea for a three-tier kitchen, with cabinets above head height, began to form.”

Hugh wanted his own kitchen to take inspiration from his love of Japanese design and their cabinet-making traditions. “At the bottom of these three levels, a base layer of drawers and cabinets made from Iroko wood was created, with recessed inset doors that act as a foundation. Above counter level, the mid layer is a calm, functional work zone with a Caesarstone ‘London grey’ worktop and cabinetry painted in Farrow and Ball ‘School House White’. Above this is the ‘canopy’ level, defined by a long, slim, structural truss that forms a threshold between the kitchen and the rest of the living space. Facing the truss and above the kitchen, deep storage cabinets, with undulating doors reference the slatted screen of the truss, and are reachable by a purpose made ladder to add functionality and interest.”

“The truss is a pure labour of love,” says Hugh. “Slats allow natural light to pass through and reference the Shoji screens of traditional Japanese homes.” Open shelving houses Hugh’s ceramic collection and lanterns lined with Japanese shoji paper form silhouettes and intricate patterns through the structure at night.” 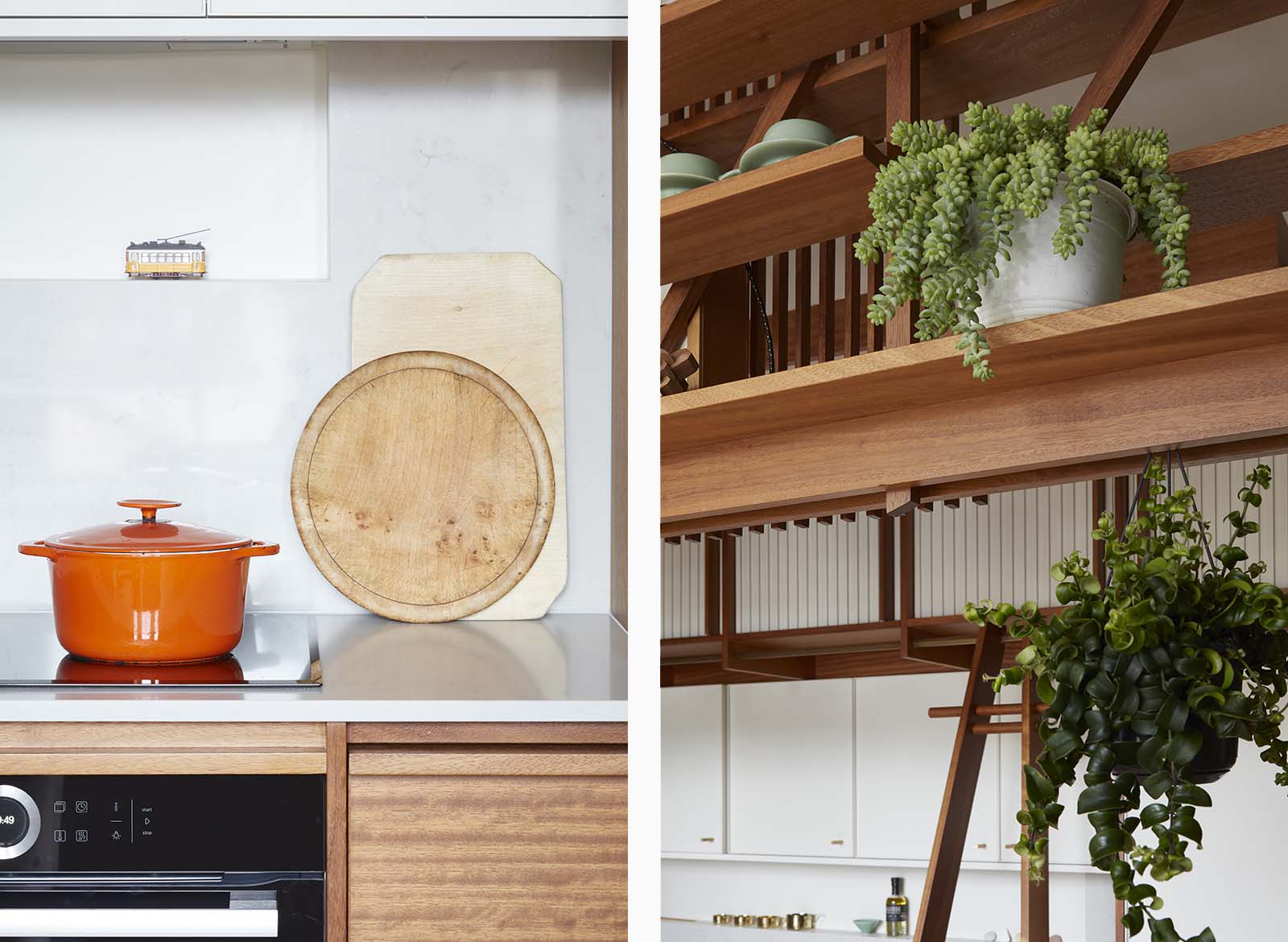 “We are also about to finish installing a kitchen where the client had children’s drawings and shopping lists pinned with magnets to the fridge door,” says Howard. “She wanted to continue doing this, but also wanted the kitchen to be a bit more minimal and clean, so we designed her a cork strip that is fitted seamlessly into the cabinet doors and runs across the top of the backsplash. The cork is stained a a dark blacky, brown and it looks really rich and tactile. We’re quite pleased with it because it allows those little things that punctuate family life to have a place at the heart of the home, while at the same time keeping the space clean, uncluttered and stylish.”

“We are naturally inquisitive,” says Howard, “and have been known to dabble in other areas of design that are interesting or unusual – we call this ‘the lab’ because it’s where we test and experiment and step out of our bubble; it helps us to bring new things into our designs and keep things fresh. Some of the more notable examples of our work are the Constellations Bar in Liverpool’s Baltic Triangle, and ‘Tending the Flame’, a piece we made for the fireplace of William Morris’ Red House National Trust property and then set fire to! We’ve also been to the ICEHOTEL in Sweden to create art suites there, and currently we’re making a limited edition cabinet with an integral record player for Bacardi.”

“Long-term, we want to spread out from the kitchen and create total works of art; where we design everything from the furnishings and fittings through to cabinetry, interior design, architecture and garden design.” Watch this space!