“Ask a thousand people why they travel and you’ll get a thousand variations on the same answer: because travelling makes us feel alive.”

“Travelling changed me in ways I never thought possible,” says Jorrit Jorritsma, founder of Keswick-based sustainable backpack brand Millican. “There is no better test of independence, resourcefulness and mindfulness. You have to live in the present, learn how to let go, release control. You learn how to deal with living in the now.”

Millican was founded in 2008 by Jorrit and his wife, Nicky Forbes-Jorritsma. The couple had first crossed paths in the early 90s on the border of Ecuador and Peru, in the small town of Vilcabamba, and from this chance encounter ended up travelling together for the next two years. When they reluctantly returned to the UK at the end of their travels, they soon slipped into the routine of ‘normal life’ but their longing for life on the open road remained, bubbling away under the surface. Then, they say, one story changed their lives for good. 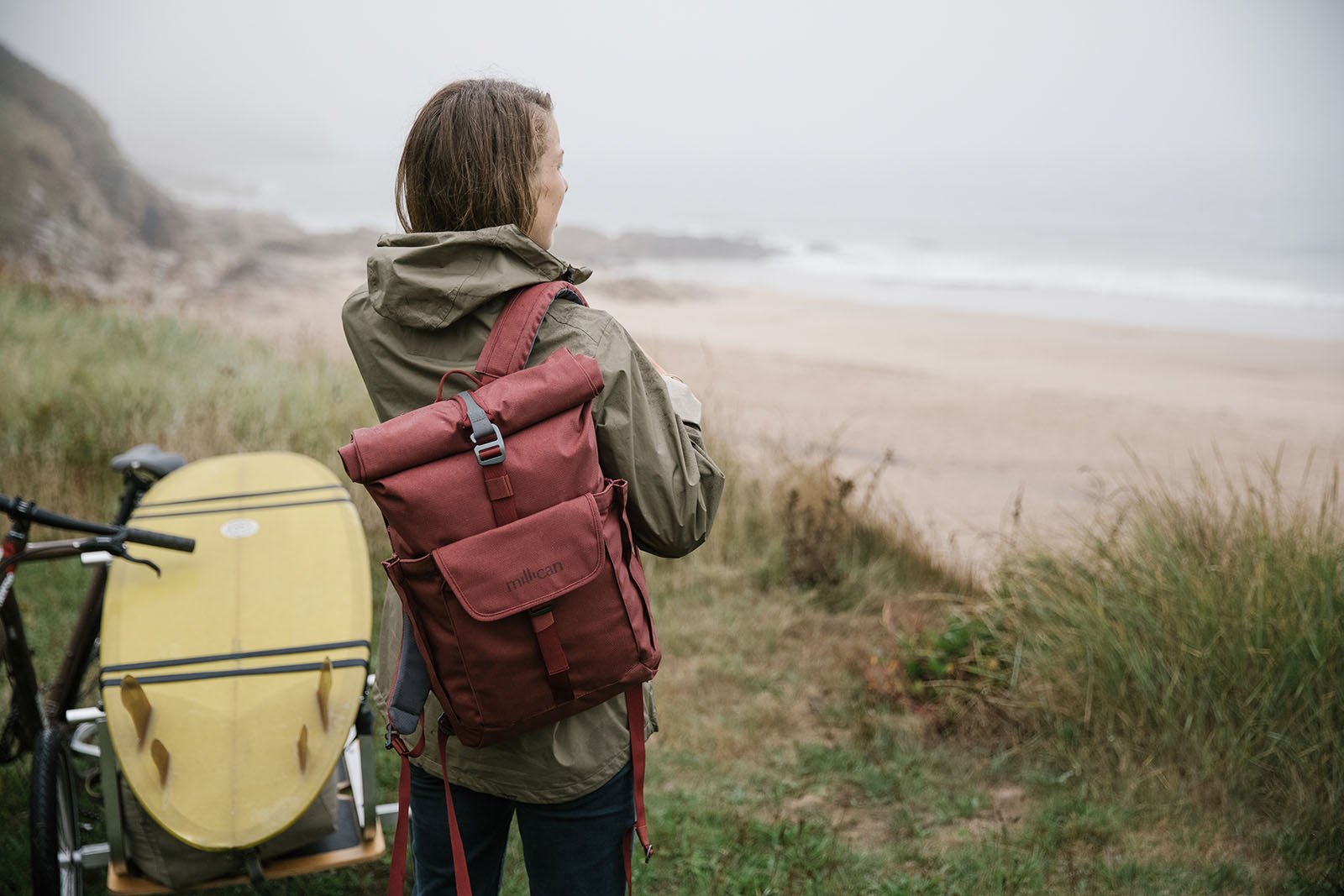 Millican Dalton quit his job as a bank clerk in London in 1901 to become the self confessed ‘Professor of Adventure’.

“Millican Dalton was a maverick of his time, living out his life in a cave in Borrowdale Valley in our home town of Keswick,” they tell me. “He had quit his job as a bank clerk in London in 1901 to become the self confessed ‘Professor of Adventure’, making his own lightweight equipment for hiking, climbing and bike backing. Like us, he also believed the outdoors should be experienced by everyone, and was one of the first adventure guides to take women out on expeditions in the Lakes.”

Jorrit first heard about Millican Dalton when he passed a window display in the famous outdoor shop George Fishers in Keswick. The tales of adventure and the maverick lifestyle of this local legend resonated with Jorrit immediately. As a tourist destination for many who descend on the Lakes, Keswick is full of outdoor shops with an array of bright neon plastic Goretex everywhere, but Jorrit felt that there had to be a different way to do things. Much like the spirit of Millican Dalton, Jorrit and Nicky founded Millican to defy convention and develop an alternative version of the bag on your back. Still just as functional, and made for a life of adventure and travel.

They take a lot of inspiration from Millican Dalton’s life and values, especially in their product and brand design choices. One of their guiding principles is the ethos of Use Less, Be More, which translates itself into everything they do as a brand but most significantly in how they approach the creation of their products. Each piece in their collection has to be multi-functional, and as suited for use in the city and as on the hillside. The seasonal shifts of the Lake District landscape provide endless inspiration. “We’ve learnt that we need to make products that can withstand the elements!” they say. “We don’t need several different bags for different activities, we need just one, and it has to work harder and stand up to the test of time, which is surrounding us everyday in the hills and mountains we stare at.” 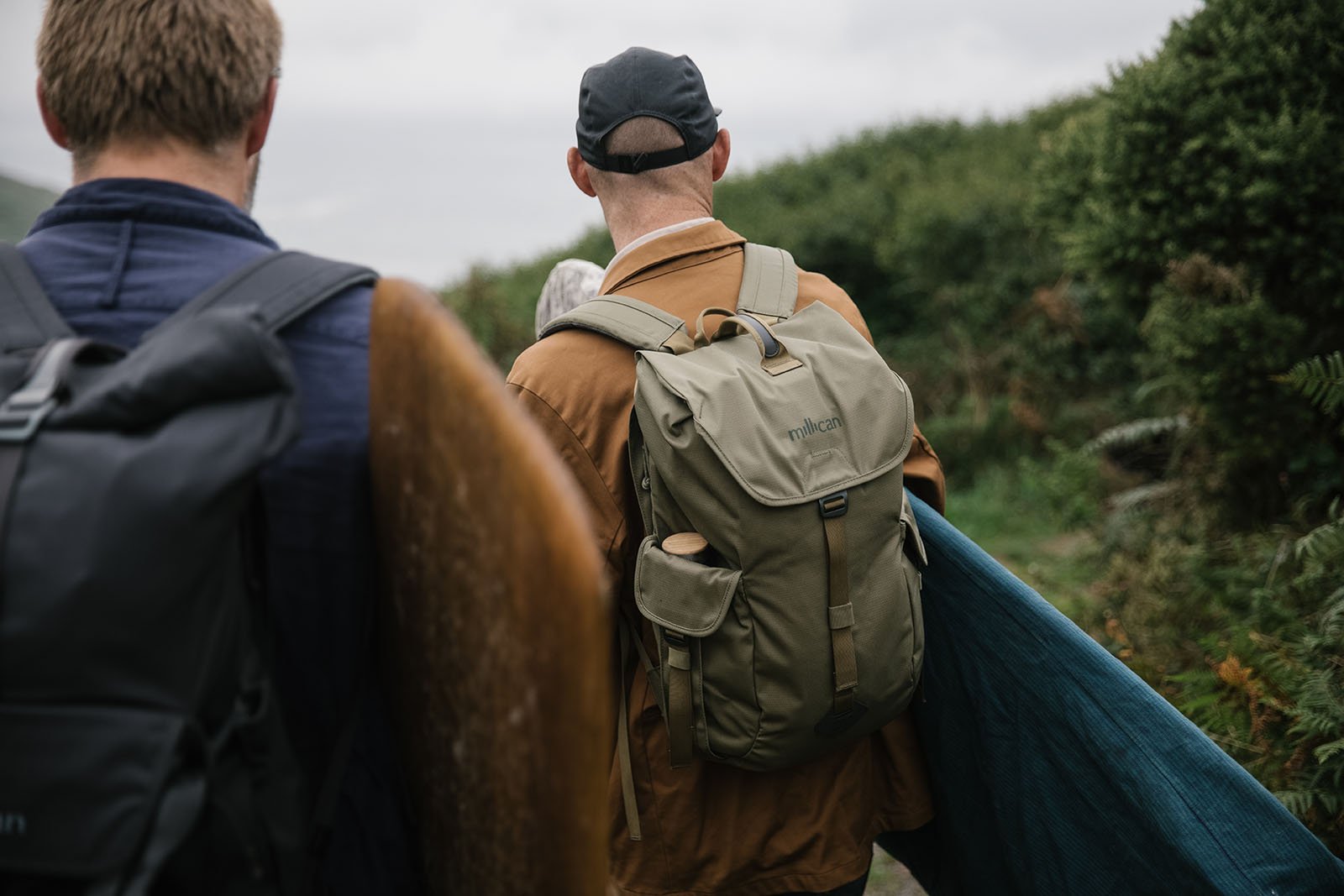 They follow the same principle when it comes to materials, seeking out fabrics that take a problem and turn it into a solution. They use exclusively developed recycled polyester outer fabrics for the Core and Maverick collection, recycling about 40 plastic bottles in the production of every bag. They place a strong emphasis on the suppliers and makers they work with. “It’s only because of our suppliers that we can continue building practical and ethical products that last a lifetime,” says Jorrit. “When we started out, we had the choice between keeping it local or working with national or even overseas suppliers. Instead of an either/or approach, we decided that the only way to build a sustainable brand from the ground up was to partner with people who share the same attitude as us – regardless of their location.”

Millican has always been about more than just product though, and that’s where storytelling comes in. They describe their creative team as “a collective of curious travellers, nonconformists who have combined their talents to make simple products that inspire others to see the world differently.” They regularly meet other travellers and communities on their journeys through the rolling hillsides of The Lakes, and by sharing these personal stories via their brand website, social channels and in person, they hope to create a source of inspiration that helps people connect with one other, and the planet. It’s this emotion, they believe, that ultimately connects their customers to the brand and in turn, to their own Millican bag.

All photography © Millican, used with permission.