Is there anything more joyous than being served a carefully crafted dish at a small neighbourhood joint, perfectly presented on a ceramic plate by a local maker?

If you’ve ever enjoyed a coffee in Stretford Food Hall, at The Creameries in Chorlton or at Ancoats’ Edinburgh Castle, then you’ll have drunk out of a cup made by Manchester Ceramics Collective’s co-founders Rebecca Morris and Matt Cronshaw. “I worked in TV for 20 years before trying my hand at ceramics,” says Rebecca, who produces designs under the brand RM Ceramic. “I’d done little bits of ceramics when I did A-level art, and a few months before I finished college Jonny Vegas came to teach us. He’s an amazing potter, brilliant throwing on the wheel. I never got a chance to try it, but it’s something I’d wanted to have a go at ever since.”

“A few years ago, when my son started nursery, I joined a members studio – Clay Studio in Hulme. I met some amazing local ceramicists there, who taught me loads and gave me the confidence to consider changing careers, which at the time seemed terrifying, and try to make a living from my ceramics. I bought a wheel, which I put in the corner of my kitchen, and each night when the kids were in bed, I watched YouTube videos on throwing and practised. That was just over 4 years ago and it literally changed my life.” 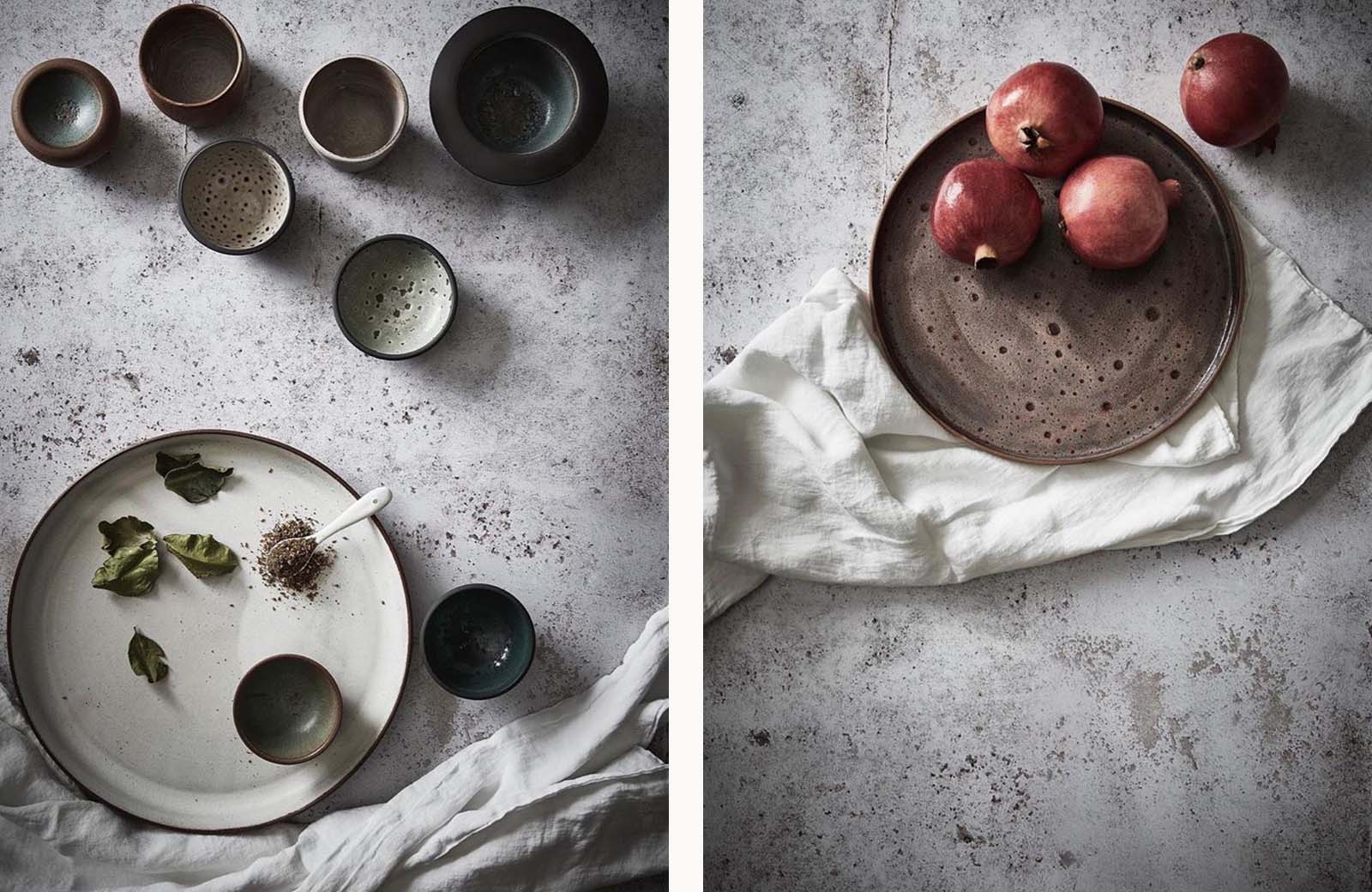 I tend to make quite sturdy functional pieces. If it doesn’t survive my 3 kids, I rethink and remake.

She set up Manchester Ceramics Collective 18 months ago, alongside four ceramicists she’d become good friends with working in Hulme; Sarah Baines, Matt Cronshaw, Sarah Crosby and Sarah Fraser. “We were all at a similar point where we wanted to expand our ceramics practice and needed the space and equipment to do that,” says Rebecca. “But studio space in and around the city centre isn’t cheap, and ceramics require expensive equipment, so we got together with the idea of setting up an affordable shared production space where ourselves and other local makers could work.”

“We spent the best part of a year looking for a space to turn into a ceramic production studio,” she tells me, “and in the end, found one in Old Trafford and formed the Manchester Ceramics Collective.” It took a few months to turn the building, which had been a children’s playgroup previously, into a fully working studio, but it now functions as a base for 11 ceramicists and potters, of varying skills and experience. “It’s a great atmosphere in the studio,” she says, “and there’s not one day that I don’t learn something new!”

The co-founders of the collective have done some amazing things in the 18 months since the studio launched. Matt Cronshaw was a finalist in Channel 4’s Great Pottery Throwdown, Sarah Fraser worked at the British Ceramics Biennial and completed a residency in Java, while member Kat Evans was selected for the Craft Councils’ prestigious Hothouse development programme.

“I’m not even sure how I would describe my style,” Rebecca says, “but I guess I like simple shapes and forms, clean lines and crisp edges. I tend to make quite sturdy functional pieces. I have 3 children so my work often gets put through its paces in our kitchen and around our dining table. If it doesn’t survive my 3 kids, I rethink and remake.”

Rebecca’s work is predominantly wheel thrown functional pieces in Stoneware. She makes a lot of crockery and tableware, and tells me she has been incredibly lucky to have worked with some amazingly talented Chefs in these early stages of her ceramics career. Her first proper commission came from The Creameries in Chorlton, via the venue’s director and designer, Soo Wilkinson. “I was so nervous when I first met Chef Mary-Ellen McTague,” Rebecca says, “she’s a complete legend in Manchester, and I didn’t think I stood a chance of having her amazing food served on anything I’d made. I ended up making lots of work for their restaurant and I can’t thank them enough for giving me such an amazing start.”

Since then she’s made pieces for Chefs Aiden Bryne and Eddie Shepherd, and other local restaurants including The Edinburgh Castle in Ancoats and Feed General Store in Stockport. Customers looking to get their hands on RM Ceramic pieces can find Rebecca’s work stocked in Chorlton’s independent lifestyle store Object, and online through Sacred Elephant Incense. Rebecca has plans for her own webshop one day. “It’s currently a work in progress,” she tells me, “but so far I’ve been kept really busy with commissions for chefs and restaurants, supplying a few independent shops, and taking direct commissions that usually come about through my Instagram.”

When I ask about her long-term ambitions, her main focus is simply to continue improving her craft, and enjoying her work. “Hopefully if I focus on those as my goals, it will show in the work I make.” As far as the Collective goes, the main aim is to build on the success they have already achieved in such a short space of time, and continue providing an affordable, vibrant and creative working space for makers to both work independently, and collaborate together.