Nowadays hot beverage options in cafes across the UK go far beyond your standard tea or coffee dilemma. ‘Superfood lattes’ are popping up everywhere, bringing a rainbow of silky colours – from gold to pink to green – to the cafe countertop.

Ryan Moore is the co-founder of Manchester-based Blendsmiths Drinkmakers, one of the premium alternative speciality brands leading the revolution. Launched in January 2018, Blendsmiths’ Turmeric, Chai, Beetroot and Matcha blends can be found in cafes across the North of England, from Pot Kettle Black and Just Between Friends in Manchester, to Wolfox and Out of the Woods in Leeds, Interval Coffee in Newcastle, Brew and Bake in Preston and Mother Espresso in Liverpool, amongst many others.

Alongside their aesthetic popularity with Instagrammers, the colourful, caffeine-free, blends have also proved a hit for their health benefits and complex flavour profiles too. While coffee has many benefits, including its high antioxidant content, many people report experiencing interrupted sleep and increased anxiousness if they consume too much, leading them to seek alternatives as they spend more and more time socialising – and working – at coffee shop tabletops.

“Matcha has been around for centuries in Asia,” says Ryan, “but if you would have asked someone on the streets of Manchester what Matcha was 5 years ago, they wouldn’t have had a clue. There are more and more speciality coffee shops, specialised restaurants, craft bars, and breweries opening in cities and towns – even the suburbs of the UK now – which provide more opportunity for the everyday person to immerse themselves in a new type of culture, and all of the interesting products that come with it.” 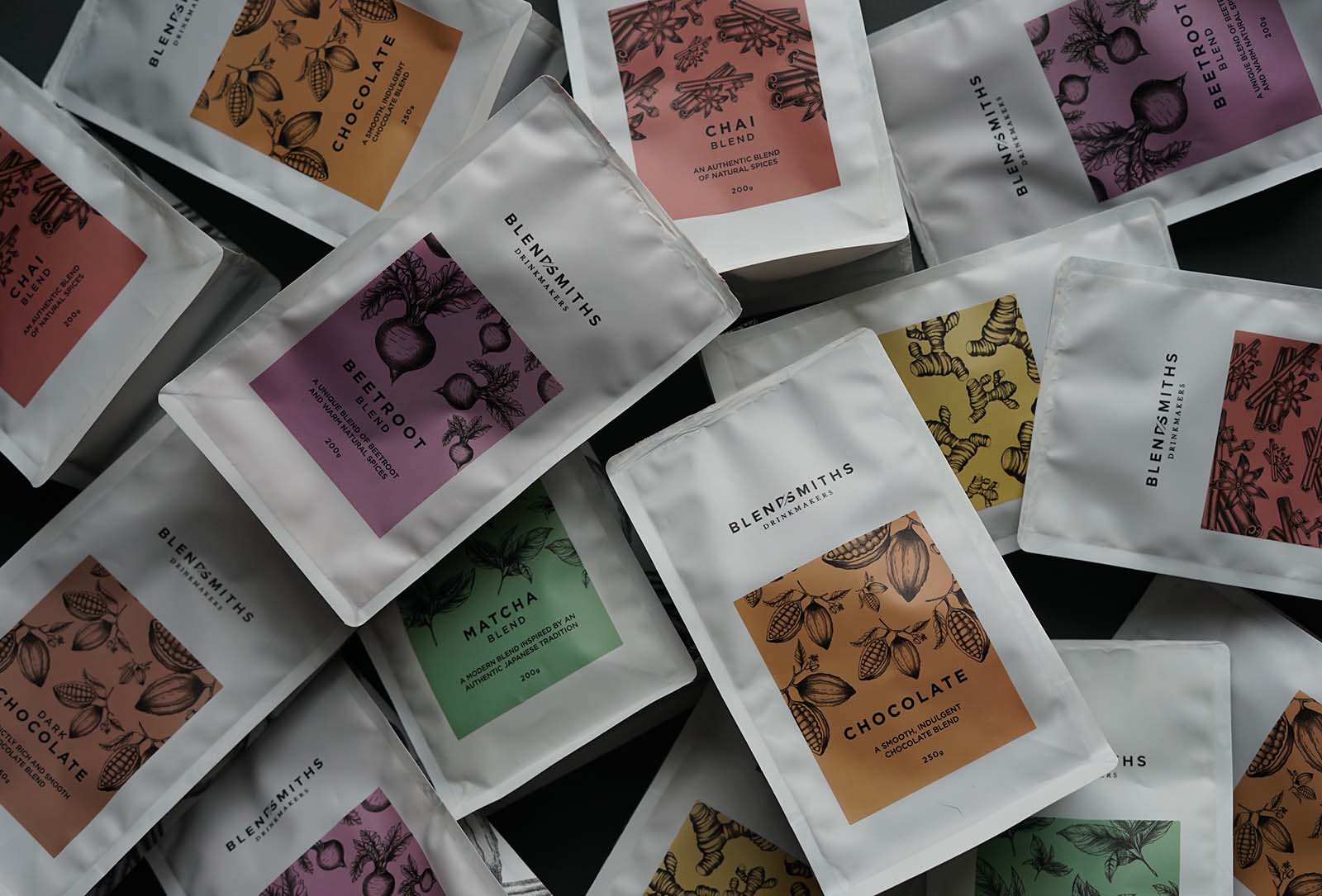 The tasting process is similar to that of coffee, as we look for mouthfeel, flavour, aftertaste, viscosity and so on.

Ryan’s immersion in the world of alternative hot beverages stems from his years spent working in the coffee industry in Australia and New Zealand. “I was drinking a lot of coffee, TOO MUCH coffee, and to be honest, it was great because I love coffee. However, it turned out to be not so great for me, as the first thing I would look for on any public outing was where the nearest toilet was! I had developed something called OAB (Overactive Bladder Syndrome), which turns out to be pretty common, and caffeine has a big red cross dangling around its neck for people who suffer with OAB.” With Ryan’s job necessitating that he spend a lot of time in cafes, naturally coffee was a huge part of that experience. “I didn’t want to lose the invigorating feeling of being part of the bustling cafe culture scene,” he tells me, “so I began looking for alternatives to drink. The likes of Turmeric, Chai and so forth were a staple on many cafe menus on that side of the world – super healthy, full of the good stuff, and colourful – but they just didn’t taste that great in my opinion.”

When Ryan returned to the UK and began his research for Blendsmiths with co-founder Chris Farnworth, they spent months reaching out to reputable producers, importers and suppliers all over the world. “Many were based here in the UK, which was important to us,” he tells me, “but our initial point of reference was to produce blends that we loved, putting the quality of the blend first and foremost. We could then work backwards when considering sustainability and so on.” 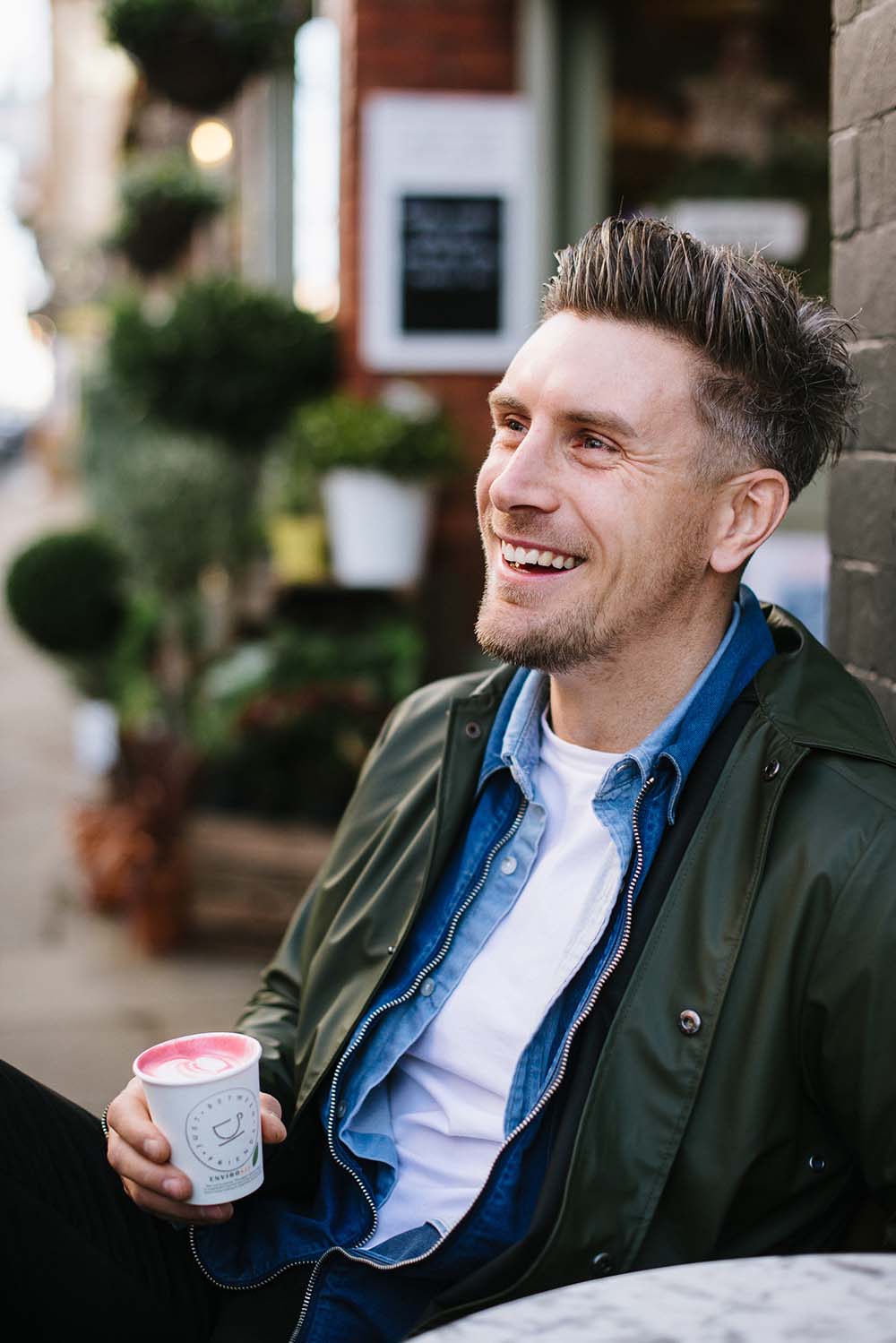 Creating the perfect recipe for each of Blendsmiths’ signature blends took a lot of finessing. “Picture a kitchen with 35 different ingredients,” says Ryan. “Now times one single ingredient by (sometimes) up to 12 different origins, and that was the task in front of us. We would start taste profiling individual ingredients against one another, which was really hard to do as a mouthful of Turmeric isn’t the most pleasant of experiences! From there, we would begin what we called ‘building’, which means adding ingredients one at a time. At this stage, we’re looking for how the ingredients react with one another, and seeing whether they work harmoniously. When we are happy enough, we’ll go to work on the ratioing; working out what percentage of ingredients are required for our blend. At this stage, the tasting process is similar to that of coffee, as we look for mouthfeel, flavour, aftertaste, viscosity and so on.”

A year ago, Blendsmiths partnered with one of only two vegan manufacturing sites in the UK, giving them access to a product development team and increased capacity to provide consistency across their blends. “We would love to source all of our ingredients from the UK,” Ryan tells me, “but that unfortunately, just isn’t possible. Our stance from the very beginning has always been to source the very best ingredients we can get our hands on, and a lot of this comes down to our extensive research into sourcing. For example, Poland has the best weather conditions and the best soil density for growing Beetroot. It’s taken us 3 years to consolidate our supply chain process and reduce our carbon footprint by working better, and more frequently, with British importers, which has been a huge step forward for us.” 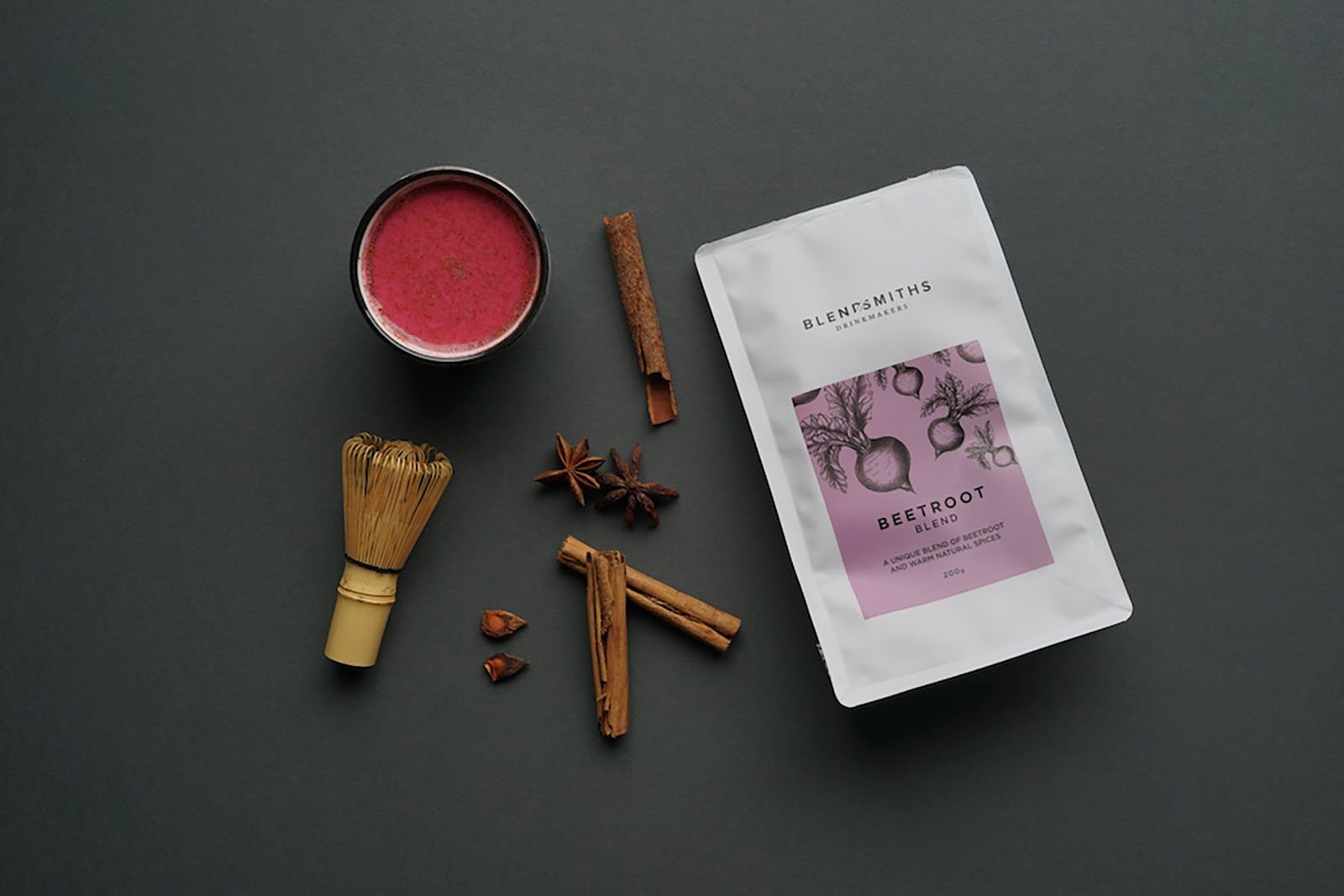 ​The inspiration behind the Blendsmiths branding originates from Ryan’s love for all things simple and minimal. “The explosive colours associated with our blends, and the intricacy of the ingredients, could have led us to get carried away, but we wanted to take a more subtle approach,” Ryan tells me, “hence the relatively low-key packaging and pastel colours. We took a lot of inspiration from the independent clothes brands we buy from, such as Ardent and Mr Simple.”

Recently though, Blendsmiths have introduced a little more detail into their packaging, which Ryan feels has helped lift the brand to new heights. “All the designs are free hand sketched by my fiancée Tiffany, who is also a partner in the business, and a primary school teacher by day,” he tells me. “We use a British design company called Wildnut Studios, who digitalise our brand collateral and have helped provide consistency in everything associated with our brand. Our packaging is produced using ‘effective recycle compatibiliser technology’, which essentially means our bags are 100% recyclable. The way they are produced reduces costs otherwise wasted on collection, packaging and selling scrap, which meets our own sustainability goals.” 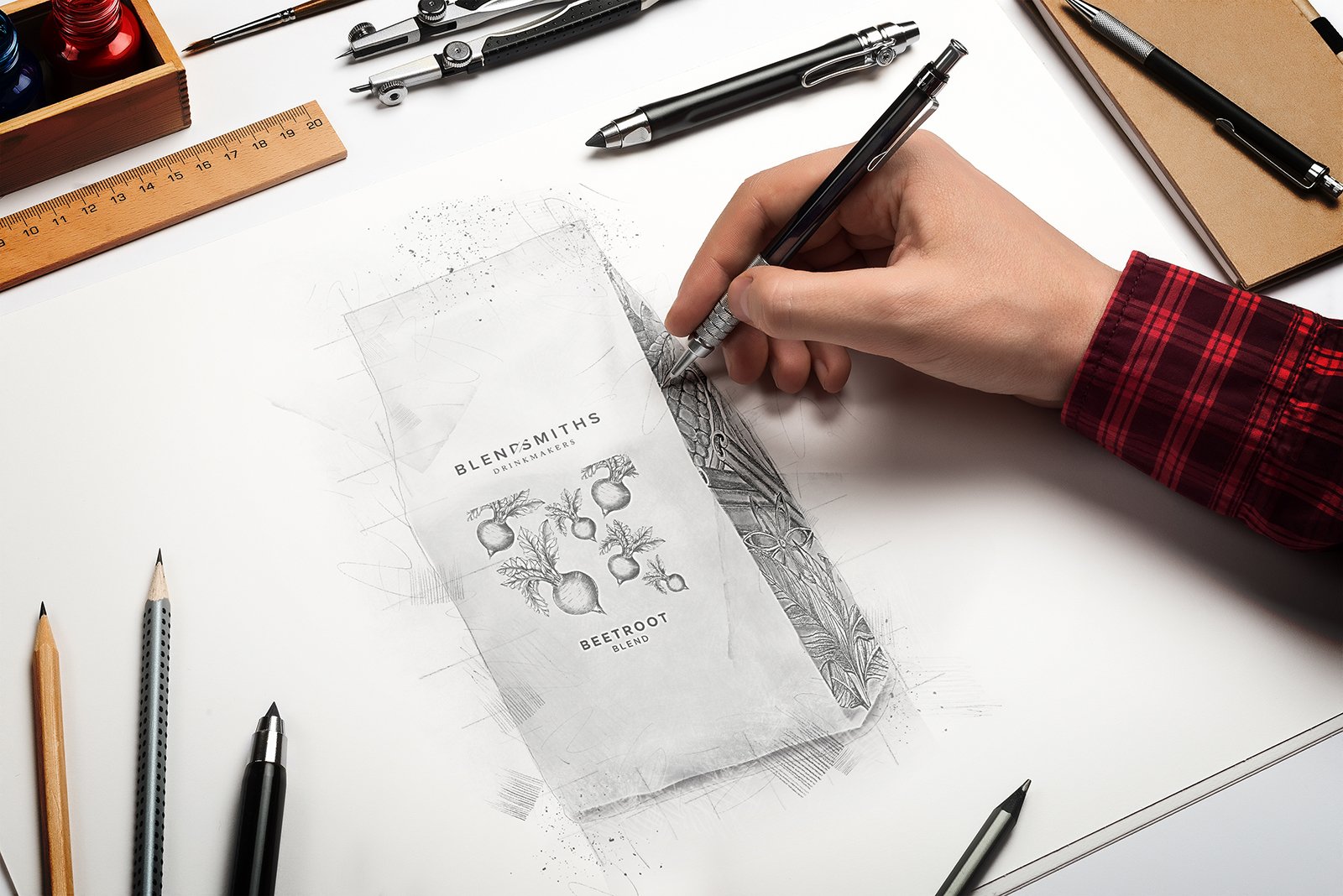 As a brand with a strong emphasis on the hospitality sector, Blendsmiths felt the full force of cafes across the country being forced to close during the initial lockdown period. “There were a couple of months back in April/May when the vast majority of our customers were shut,” says Ryan, “meaning a production line in the facility was switched off, and half of our production facility employees had to be put on the Governments furlough scheme.” Ryan and Chris used the time to take stock of their current way of working, and evaluate whether they had been doing enough to better the planet. “We have been running a program called ‘Better Together’ since Covid-19 reared its ugly head,” Ryan tells me, “and it’s as simple as it sounds. We are collaborating with similar companies for the greater good because, quite simply, we are better together. Competing and beating one another down just doesn’t benefit us long term.”

“I hope this approach is taken by our industry, and helps lead to less waste and more reusable options. I think our industry is incredibly good at implementing these sorts of things already but, more importantly, as our industry reacts and develops, we need a more conscious effort from consumers. Changing consumer habits to support local, independent businesses is so important. 12 months from now we could still be in some form of regional lockdown, and those really great cafes that have opened in the leafy suburbs of the North might no longer be in existence, if people keep abandoning them for the quick fix convenience of coffee shop chains.”

Going forward, Blendsmiths hope to see the likes of Turmeric, Matcha, Chai and Beetroot becoming a staple in all hospitality settings and household kitchen cupboards, becoming just as important as tea and coffee. Their products are available to purchase online for home brewing, and can be blended easily with a steam wand, on the stove top or in the microwave, using your preferred milk option. “We will continue to diversify with a wider range of products and be more accessible to more people,” Ryan says. “If the pandemic has taught us one thing, it’s diversify and just go for it!”