Long before potters began crafting at the wheel, they were creating beautiful pots and clay forms using their hands, fingers, and basic tools.

Irene & Edith founder Nichola Naylon creates hand built statement ceramics for the home in a similar way, combining textured clays, luxurious glazes and glimmers of gold and copper lustre. “Making and creating has always been an important part of my life, giving me peace, space and a way to soothe my mind,” she says.

Pottery became her creative focus while studying for a degree in Contemporary Applied Arts, in Carlisle. After graduating, she first headed down to London and embarked upon a career as a Merchandiser for a luxury luggage & handbag retailer, before moving on to the Royal Academy of Arts. Ten years on and the call of a quiet life in the country beckoned, with Nichola relocating first to the rugged coastline of North Wales – with “plenty of space to blow the cobwebs away” – on a circuitous route back to her native North West.

She’s now back to the place her 18-year-old self couldn’t wait to leave, she tells me, with a perfectly formed studio to craft from in her garage. “Irene and Edith came to life in 2014,” she says, “after I had hit a turning point in my life and really desired the need for more creativity and time to slow down my pace a little. My career in London was an amazing experience, but I never felt the city would be my home forever. Plus, as interesting as the work was, it didn’t fulfil me creatively. Irene & Edith came to life as a creative focus for me to work beneath, while keeping some flexibility in the direction I could take it. The two wonderful women I named my brand after were my Grandmothers, which made building something unknown – and fairly scary – a safe, loving space for me to grow in.” 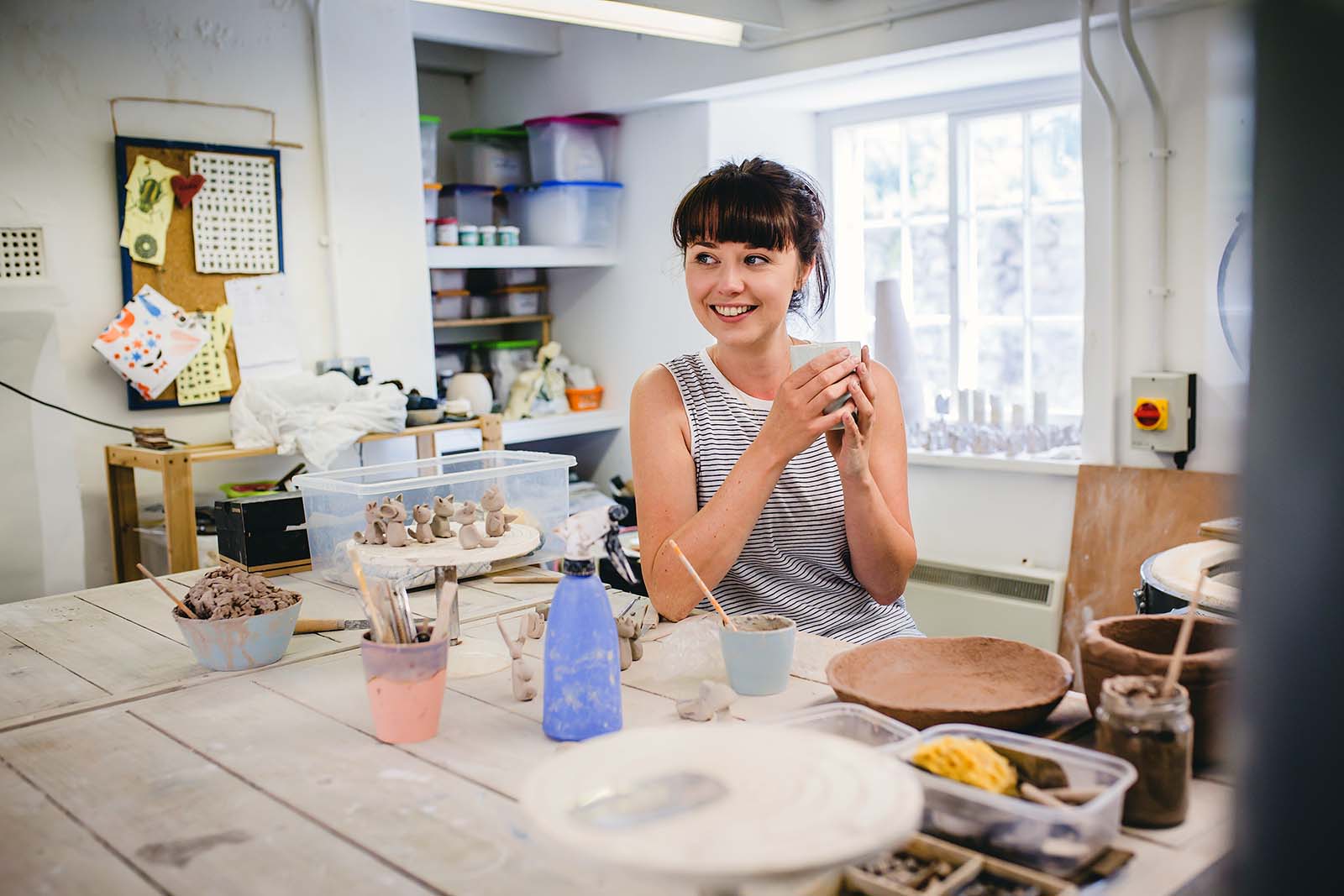 I began using gold or copper lustres – mainly by chance – but they transform the work into artefact-like pieces.

Her creative practice runs side by side in two avenues she tells me; “what inspires me, and the making process”. Her inspiration comes mainly from nature, with pockets of design, architecture and fashion also playing a part.  She really misses the beach walks and park near her old studio in North Wales she says, as they provided the perfect locations for inspiration to strike; “I love walking in nature and taking time to observe what’s around me, usually taking lots of photos, and filling my mental sketchbook”.

Her making process is a combination of press moulding and coiling. Using rough, tactile clay such as Crank or Grogged stoneware to build statement forms, and taking time to clean and smooth the work to give defined lines. She then uses luxurious, rich glazes and a gold lustre finish to create contrasts against the organic surface of the clay. “I enjoy using alternative, tactile clay that’s slightly unusual,” she says. “It’s great to build with, and adds contrast to the finished pieces. I hand mix my glazes and also began using gold or copper lustres, mainly by chance, but the results transform the work into artefact-like pieces.”

She places a strong emphasis on the value of slow making. “This practice is very important to me,” she says, “as I love being present and connecting with the clay I’m using, taking note of every inch of my work. It feels very meditative and satisfying watching something grow.” It’s one of the key factors she believes plays a part in the current resurgence of traditional crafting. “People are seeing and feeling the effects of the speed at which our lives are being consumed. It takes its toll on our soul, wellbeing and mindset, but also on our planet – as we’ve become so aware of over the past few years. Pottery helps my mental health massively and taking pleasure in a task that doesn’t involve a screen can be very nourishing.” 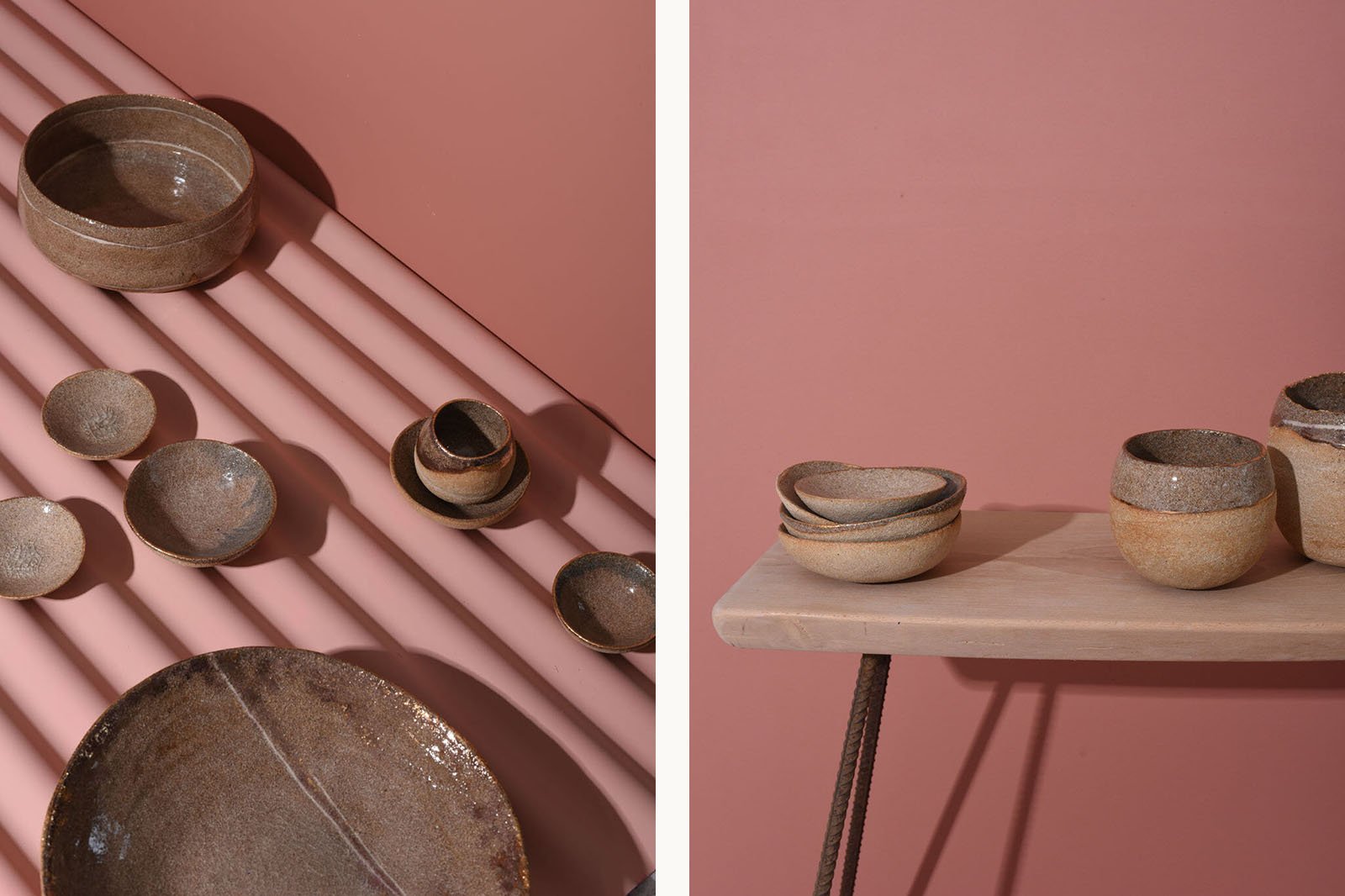 At the start of 2020 Nichola had begun working with a graphic designer to overhaul her website and had totally rebranded and restyled her product shots to launch her online shop. “Having completed all of this before the pandemic hit really helped me maintain and continue to grow the business,” she tells me. She’s also benefited from taking part in a couple of organised sales online during lockdown, one held by Curated Makers and the second by The Hepworth Wakefield, which have helped boost her visibility and given her targeted access to customers seeking to support small local businesses at this time.

“It’s going to be difficult for the industry going forward,” she tells me, “but the way in which creatives are responding, evolving and reacting to a situation is in our nature, so I have complete faith the creative industries will grow and evolve as they always have. I feel this period may well have facilitated some amazing transformations creatively, and hopefully we’ll all grow into more responsible humans for our work, each other and our planet.”

As for her own plans, she can’t wait to continue growing her creative community across the North West and begin running workshops again. She had previously been running relaxed, informal sessions from her garage studio in Lowton, near Warrington, giving budding potters the chance to explore different textured clays and embrace the meditative feeling of slow making.

All styling & photography © We Are Kin, used with permission.