Sheffield has always been a city of makers, from the little mesters to the steelworks. Even now, in amongst the 1960s modernism and Brutalist concrete buildings, a strong culture of creativity continues to flourish across the city.

Husband-and-wife ceramicists Catherine and Matt West set up their pottery workspace, Pottery West, at Sheffield city centre’s Yorkshire Artspace in 2015, with a desire to make functional but beautiful tableware and homeware. Both part of the ‘self-taught potters club’ — a growing group of makers who didn’t train via a traditional pottery apprenticeship, but came to ceramics through other routes – they now design and craft small-batch, wheel-thrown homeware with an emphasis on simple, ergonomic forms and tactile functional glazes. Working mainly in stoneware and firing in an electric kiln, they follow traditional pottery techniques and document their ceramics processes and collection development on Instagram, where they have amassed over 46,000 adoring followers in the six years since their pottery journey began.

Whilst the processes used by the larger ceramics industry is fascinating to us, it is the aesthetic of pots that are made on a more local and individual level that really appeal most.

The couple share a commitment to craftsmanship, aesthetics and function, with a focus on small batch, quality and refined pieces. Inspiration comes from all around, but most often from things that are sculptural and painterly in the most elementary ways: texture, tone, light, and form. Their pieces celebrate the natural and beautiful tones, chance colourations, and distinctions that only hand-made and small-batch ceramics can give.  “We are often influenced by an idea of a material,” says Matt. “Where it comes from geologically and geographically can capture the imagination. For us, the design process is not a case of drawing and researching and then sending to production; it is a more nuanced and organic response to a specific material process.”

Working with the potter’s wheel is predominantly process-driven, working within the parameters of a traditional method of production. “When we first started to make ceramics, we would have a more definite idea of form before we began working, new ideas for forms which we hadn’t seen before, but over time we have realised that in wheel-thrown ceramics there are archetypal forms that don’t need to be reinvented, just tweaked and adjusted, and it is better to begin designing within that context rather than reinvent the wheel, so to speak.”

Both Catherine and Matt are drawn to ceramics that are finely crafted, with attention to functional purpose and beauty, but that also show traces of a steady hand. “Whilst the processes used by the larger ceramics industry is fascinating to us, it is the aesthetic of pots that are made on a more local and individual level that really appeal most.” 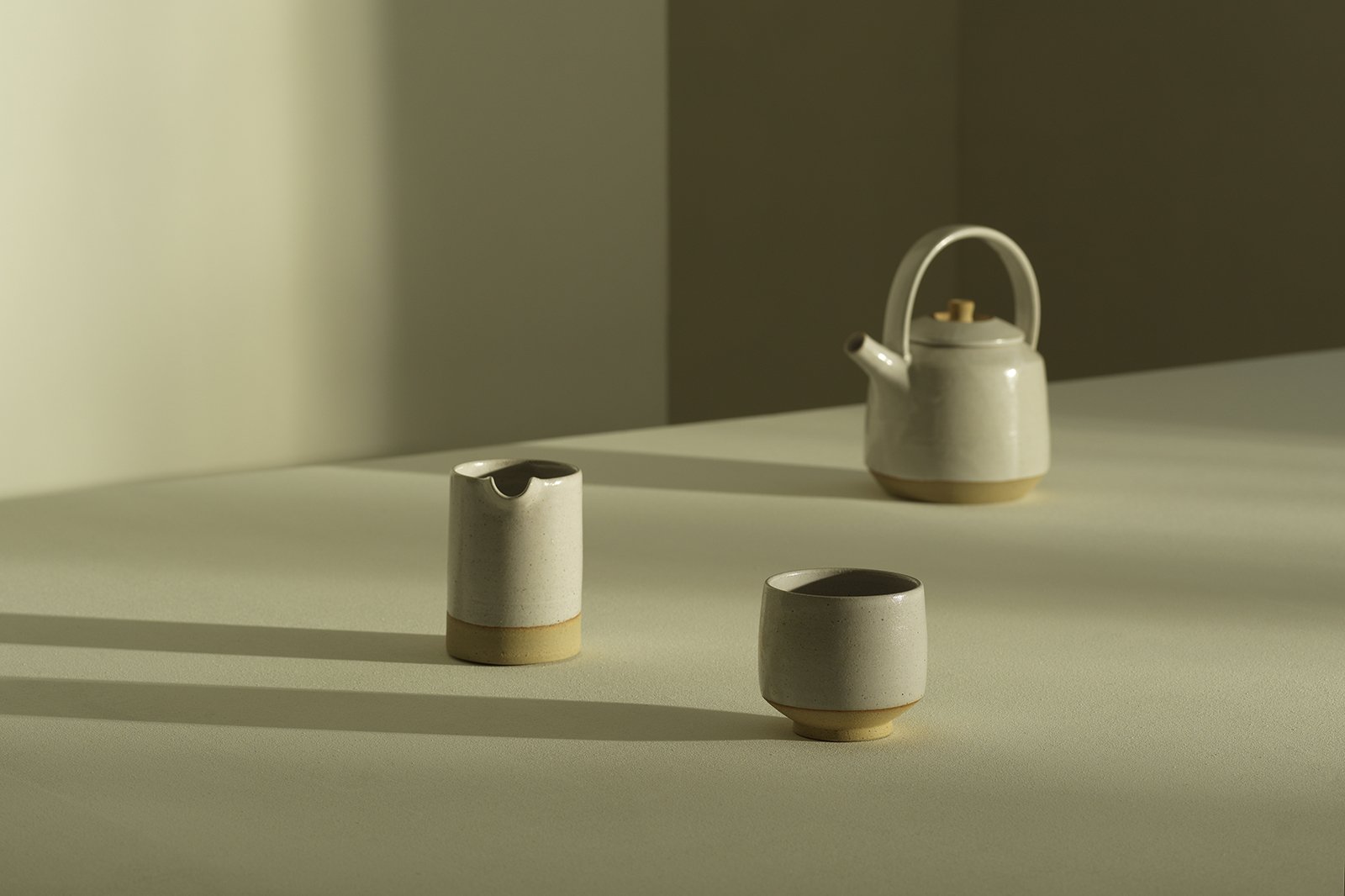 Since establishing the studio, alongside the development of their own tableware ranges, Catherine and Matt have worked on the design and production of tableware for restaurants, coffee roasters and independent retailers, including Toast, David Mellor Design and Matches Fashion. Opening their own online shop bi-monthly, they often sell out of lines in a matter of hours.

The couple take control of separate parts of the production process, with Matt making the forms and Catherine the glazes. Each form is thrown in small batches to help bring consistency. “We use a stoneware clay with a high amount of surface texture and speckle,” says Matt, “as we found that this body gives our glazes much more depth than a smoother clay type. We also only glaze part of the outside of our pots, leaving the raw clay exposed to give both a change of visual and physical texture.”

They have developed their own glaze recipes by tinkering with already established formulas, much like a chef creating a new recipe, using a combination of powdered minerals and metals that are mixed into and suspended in water. The bisque fired pots are then coated in this mixture by dipping and pouring. “When working on glazes, it is less a colour that we are trying to achieve, but perhaps a texture, an exploration of a certain material, such as iron, which we are currently investigating with our wood firings,” says Catherine. 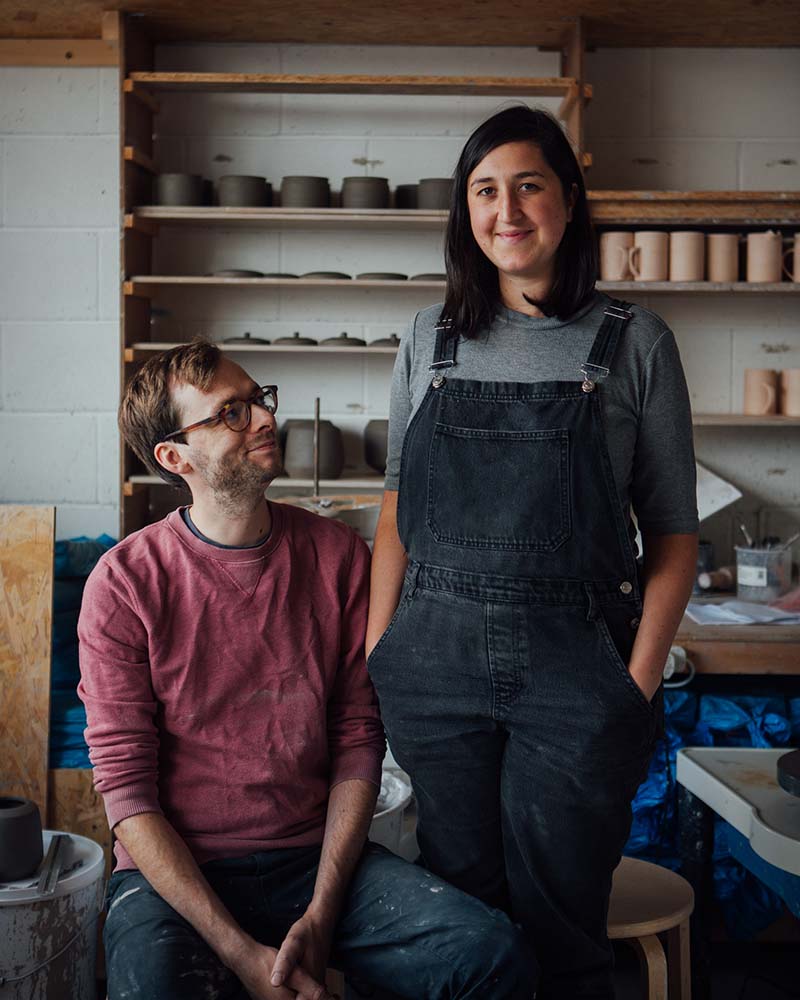 For a brand who have grown a devoted following on Instagram, it stands to reason that photography has, in part, influenced their work on an aesthetic level. “This is not a big thing, but the way we have come to photograph our work, with attention to light and shadow, has certainly informed our decision making, from the glazes we develop to the trimmed angle on a tea bowl footring, which is bevelled just to the point where a shadow forms and gives a small illusion of hovering above the surface on which it sits.”

The aesthetic of making by hand has always driven the couple. Before potting, Matt was a baker, and continues to make bread at home, while Catherine dabbles in dressmaking, knitting and gardening. “I hope our son will absorb our love of craftsmanship – I think it’s important to know that things are designed and made by people, and come from the earth in some way.”

Of course, the current pandemic has had an effect on the way the studio has operated over the past few months. “We’ve changed the way we work quite significantly due to Covid-19, mainly because we no longer have our assistant, Judy, working with us, and we have no childcare, so made a decision that I would continue with production in the studio whilst Catherine looks after our son at home,” says Matt. “It is very peaceful in the studio compared to home – so I’m not sure who has the short straw! The decision was based on Catherine being pregnant and it just felt safer to work this way. It’s been really strange working alone, as we’re so used to working as a team now – tasks such as making teapots have been a real challenge as we perfected a great system to make a batch in a group of 3 of 4 people, so now I can make maybe 10 in a couple of days if i’m lucky. Our friend, Carla, who is also a ceramicist is now working with us a couple of days a week whilst we adjust back to a new normal – it’s a relief to have more hands on deck.” 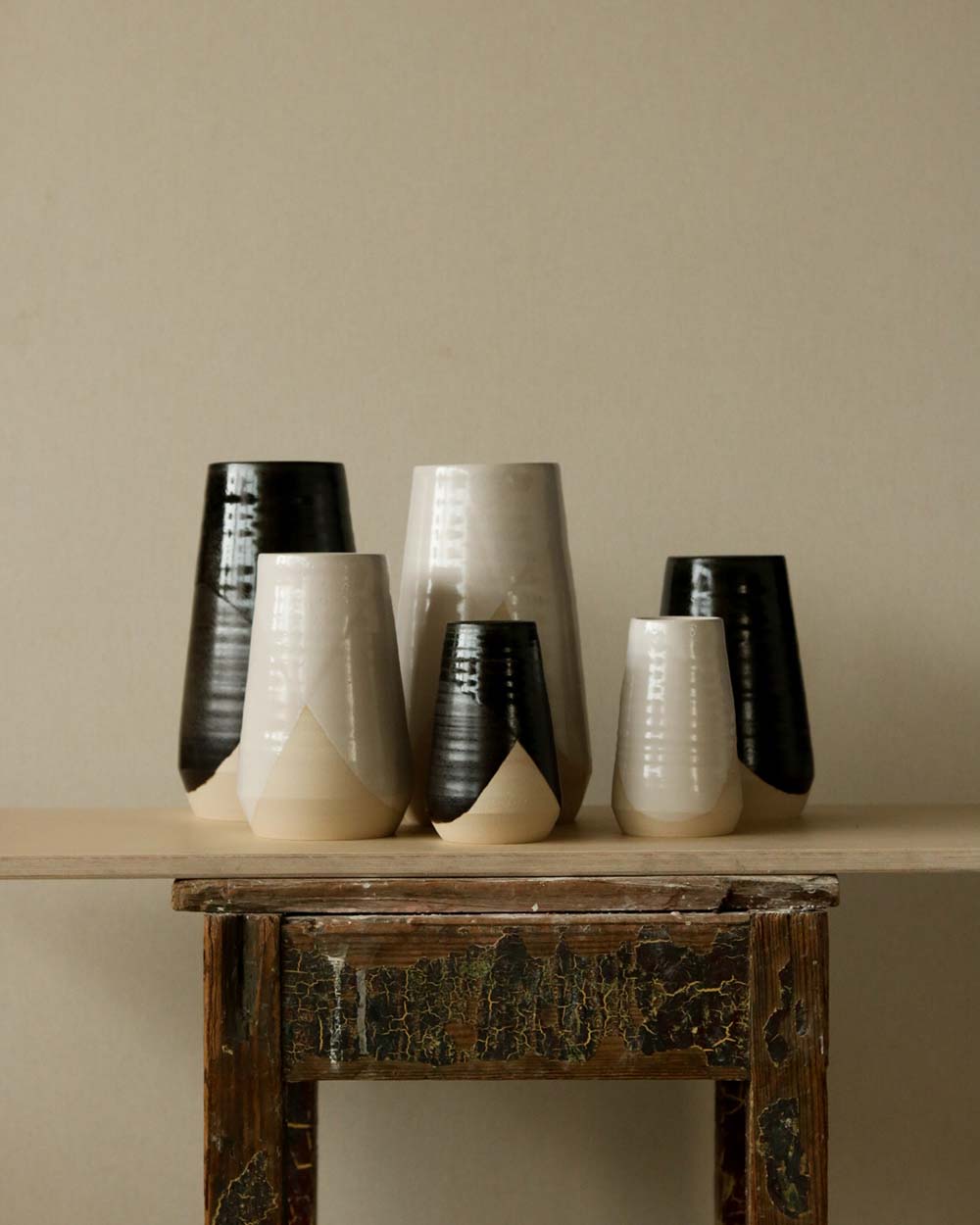 The couple have navigated this new normal by setting up a pre-order system on their website with a lead time of 8-12 weeks, as opposed to offering ready-to-ship pieces in their usual manner. This has meant they can respond to specific orders and ensure everything that is thrown is purposeful, with a home ready-and-waiting. “We are extremely lucky to have such loyal supporters and buyers of our work,” says Matt, “and I think it has been positive for many of them too, as they can order what they like rather than waiting for shop updates with limited stock where inevitably certain items sell out.” It’s been such a successful approach that they’re considering keeping the system as a permanent feature.

Matt has also been able to use lockdown to work on some new products, such as the stoneware vases which they released in early June, and hopes to continue to release limited edition pieces in this manner. “The looming recession is worrying, but you have to just keep on at it and think about the long term – we want to make pots for the rest of our lives, so we hope that if we continue to perfect our craft and keep on making true to our own ideals, there will always be people around who would like to buy them, whatever the fashion or economic context.”